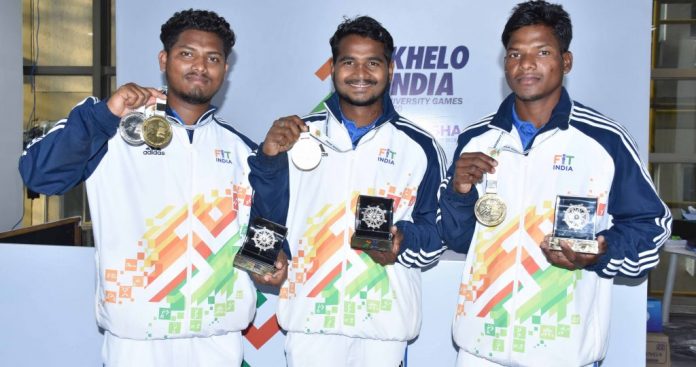 Bhubaneswar: Odisha archer Ranjit Naik of KIIT University had a wonderful outing Wednesday as he claimed a silver medal in the men’s individual recurve event while the institute got the gold in the team event of the Khelo India University Games.

Uttkarsh confessed to being nervous at the start against Ranjit, but calmed down after losing the opening set to win the next two. He could sense the home archer feeling the heat in the final set and took advantage of that to emerge victorious. Uttkarsh scored 136 points, four more than Ranjit.

Till now 24 universities from across the country have won at least one gold medal, while 39 have claimed at least one medal, but Savitribai Phule Pune University, with 10 gold medals, are placed on top of the charts. Their athletes have won four silver and six bronze medals as well.

With 24 medals, including 8 gold, Panjab University have the largest haul so far.

Three new National marks were set in the men’s 55kg class weightlifting. Prashant Suresh Koli (Kavayitri Bahinabai Chaudhari University, Jalgaon) set the hall alight with a 110kg Snatch, improving on R Madhavan’s mark of 106kg. He threw the gauntlet down with another National record in Clean and Jerk, lifting 133kg on his final attempt.

However, within a few moments, Shivaji University’s Sanket Mahadev Sagar turned the tables on him, breaking that Clean and Jerk mark, lifting 138kg to edge past Prashant Koli’s total of 243kg for another National mark that was a good 5kg more than Ch. Rishikanta Singh’s tally of 239kg set in the National Championships in Visakhapatnam last year.

She first won the 200m Individual Medley and completed a sweep of Freestyle sprints by winning the 100m. She had also won the 100m Butterfly gold Tuesday to add to the 50m and 200m Free crowns.

Panjab University’s Siddhanth Sejwal’s bid to finish with six gold was thwarted when he finished third in the men’s 100m Freestyle behind Rudransh Mishra (University of Mumbai) and Harshal Sarang (Veer Narmad South Gujarat University). He anchored his team to the 4x200m Freestyle win and took gold in the 50m Backstroke. But with five gold, he was a satisfied man.