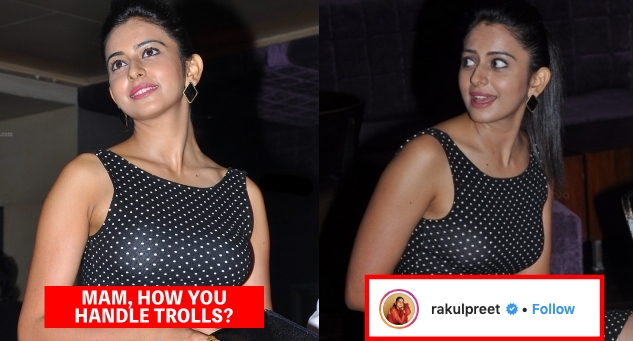 Rakul Preet Singh is one of the most sought after actresses down south. She is very popular on social media for her posts. However, like any celebrity, Rakul has also been subjected to online abuse and trolling.

Recently, in an interview, Rakul opened up on being trolled on social media and how she deals with them.

Recalling an incident, Rakul said there was a troll who wrote, ‘When she forgot to wear her pant after the session in the car’.

To which she replied ‘I think your mother does a lot of sessions in the car so you’re an expert!! Ask her to give u some sense also besides these session details .. till the time people like this exist women can’t be safe .. just debating about equality and safety won’t help…’

Rakul said, “I had woken up to that post and I just couldn’t hold myself from replying.” She further said that it was the girl in her and not the actor who replied, and added, “I feel there’s so much negativity and hatred in this world. Now, I’ve come to a point that there’s a certain section of the society that you can’t do anything about.”

Talking about the trolls, she revealed how trolls are people mostly without any real identity. She said,

“Trolls are people mostly without any real identity. They think they’re of some importance to a verified profile, and getting a response on their cheap remark would validate their existence. But it’s a myth.”

In the end, she said that she is okay with harmless trolling. But she will not stay quiet if someone attacks her characters or her family.

On the work front, Rakul will next be seen in the movie Attack along with John Abraham and Jacqueline Fernandez and an untitled movie opposite Arjun Kapoor.