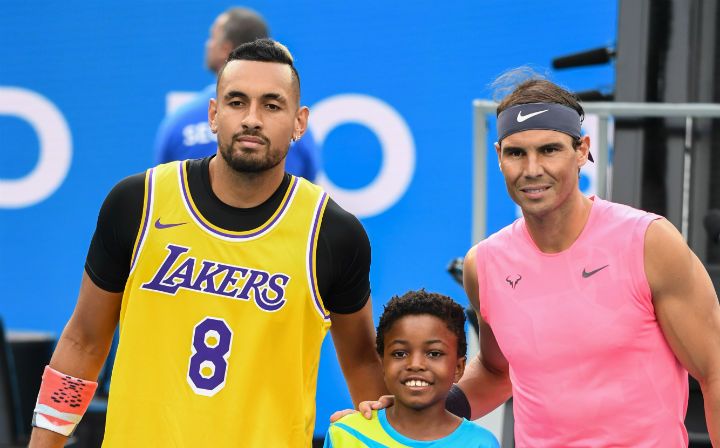 When Kobe Bryant died on Sunday it was a tragic shock to everyone. The entire sports world, and even those outside the sport, couldn’t help but be overcome with grief. This of course went beyond the U.S. because Bryant was a global figure. Neymar celebrated a goal by paying tribute to Bryant and others spoke about him.

One of the athletes that spoke about him was tennis star, Rafael Nadal. Half a world away playing in the Australian Open, Nadal took the court at 3 a.m. on the east coast of the United States, playing a match against Nick Kyrgios, who wore a Bryant No. 8 jersey to the court.

After his four-set victory early Monday, Nadal was asked about Bryant by tennis commentator John McEnroe and he encouraged the crowd at Rod Laver Arena to celebrate the late Laker legend.

“I woke up this morning with this terrible news. It’s super sad,” Nadal said. “He had been one of the greatest sportsmen in history, so he deserves a round of big applause.”

Even though Nadal had never spent time with him he is friends with someone that was a close teammate to Bryant: Spanish star basketball player Pau Gasol.

“I didn’t spend time with him, but I met him. I have a very close friend that was playing with him, Pau Gasol, and he always told me that he has a spirit of overcoming. He has a spirit of (being a) hard worker. He always wanted more. He always wanted to increase his level. He was a true inspiration for a world of a sport and for a lot of kids. It’s one of those days you want to forget, but of course, Kobe Bryant will be in our hearts and our lives for the rest of our minds.”

Bryant was seen across the entire sports world on Sunday as fans everywhere donned his jersey, even in Rod Laver Arena. There’s going to be a lot of Kobe jersey sightings and tributes this week and beyond, highlighting the impact and influence Bryant had far outside of just basketball.