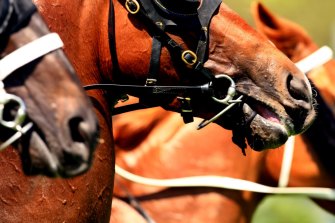 Track likely around heavy 8/9 and rail true so on or near the pace early before trending away from the fence.

Tricky opener, with several first starters likely to have a big hand. One of them, three-year-old home-track filly 7. Beauty Betty (Swiss Ace x Ugly Betty by High Yield) looks the one to beat after winning both lead-up trials, the latest sat three wide on a true tempo, and eased home with plenty in the tank, still clocking a tick over 33 seconds for the final 600m. Senior country hoop and trial rider sticks for in-form stable.

Dangers: The intriguingly bred three-year-old Tamworth gelding 1. Crackerjack Kenny is on the brink of breaking through at ninth start after powering home from well back in all three runs this prep, including less than a length off smart Free Rider last start. Didn’t look at home in previous runs on rain-affected ground, and sire had little or no wet track form, despite being a group 1 northern hemisphere winner before having four runs in Victoria. Big watch on debut three-year-old Newcastle gelding 2. Devil’s Choice (Choisir x Sheer Fantazee by Testa Rossa) who trialled well, and stable is firing. Rival Scone three-year-old 4. Glendor will be better for the first-up run in heavy ground at Taree when couldn’t hang on after leading as a well-fancied favourite; while three-year-old debutant Muswellbrook gelding 3. Forbidden Palace (Not A Single Doubt x Bernazena by Bernardini) has spent a long time at the trials since outclassed in a listed sprint on debut at Flemington in the spring of 2018, but is bred to handle wet ground.

How to play it: Beauty Betty to win
Odds and Evens: Odds

There are plenty of options for punters at Scone on Tuesday.Credit:Jenny Evans

Play it again Sam over the same trip for the three-year-olds at set weights. Local filly 6.Confinement resumes off two smart trials, the latest recovering from a slow start to lead easily and only run down late by the smart finisher Fritz’s Factor. Has already shown a liking for wet tracks, and the blinkers come off.

Dangers: Tamworth colt and first starter 1. Farmer’s Friend (Zoffany x Forcibly by Marauding) wasn’t pushed out leading comfortably all the way in a recent home trial, and this suits, although must be a query in these conditions on debut. Rival Tamworth gelding 4. Marcus Cassius (Time For War x Love The Feeling by Semipalatinsk) has also trialled nicely under a hold, and sire was a group 2 winner as a two-year-old in heavy ground; while another home-track filly 9. Inferno Miss stuck on well debuting here in a handy maiden four weeks back, and sire remarkably won his first three starts in soft 7 ground up to listed level.

Still with the sprinters, and improving three-year-old local gelding 1. Golden Avenger can go close third-up after an even effort behind high-class Hellenism in a highway at Randwick, and only previous run on rain-affected ground was beaten by an eyelash as a two-year-old.

Dangers: Another one from the local Stephen Jones yard, four-year-old mare 5. The Light Of Day just missed at Tamworth third-up in this grade after a smart maiden win at Taree to start the prep. Has more than enough ability over this trip, but never been on anything under a Good surface. You’re never quite sure which six-year-old gelding 4. Invincible Bot is turning up, but this is his best distance, and has sound wet track form. Gilgandra six-year-old gelding 8. Baby Merlin has a poor strike rate, and takes on a few better ones here, but best form is clearly in wet ground.

How to play it: Golden Avenger to win and box exacta 1,4,5
Odds and Evens: Split

Fairly open contest, although now seven-year-old Wyong gelding 4. Scatter Blast has returned to the winner’s stall finishing powerfully third-up this grade at Tamworth, he can go on with it third-up. One of the better wet-trackers on the program.

Dangers: Tamworth six-year-old mare 2. Ready To Go Go hasn’t won for a long time, but can fire third-up dropping back in quality, and wet track form is OK. Newcastle four-year-old mare 1. Power Of Wexford should be right at her peak after four runs back, finishing well last time in a class 3 through inferior ground. Drops a little in grade, but up sharply in weight, and heavy track is some query. Tamworth five-year-old mare 7. Olivia’s Girl is better than her two wins and four placings from 25 starts. Got home OK behind Scatter Blast in this grade before again doing best work late in a handy class 3 at Walcha.

How to play it: Scatter Blast to win and box trifecta 1,2,4,7
Odds and Evens: Split

Potentially very high rating class 1, and looms as a two-horse war. Well-bred three-year-old Newcastle gelding 1. Animate can bounce back with the blinkers going on after finishing hard as an easing favourite first-up at Port Macquarie. By World Cup and Kentucky Derby-winning Animal Kingdom, out of a smart mare who did handle wet ground. Extra ground and wider draw suit well, and only needs to get through the conditions to be the one to beat.

Dangers: Smart Newcastle mare 2. Lochita has bigger fish to fry after powering home as a well-tried favourite to win first-up at Taree on a heavy 10 beating Toguchi, who was only then beaten by a whisker at her next start. Be shocked if one of those two doesn’t win, but don’t completely under-sell three-year-old Muswellbrook gelding 3. Chargement who can improve second-up.

How to play it: Animate to win and quinella 1 and 2
Odds and Evens: Split

Thinner and tough one here with plenty of chances. Like the value about improving three-year-old Wyong filly 13. Pop’s Glory with the blinkers going on. Worked home fairly in two runs to start her career, but this is weaker and will love the long sweeping run in here. By a group 1 winner in the UK who was very good in wet ground.

Dangers: Newcastle three-year-old gelding 2. Mbappe will appreciate the longer trip after working home on debut here a month back, but rises in weight. Wyong three-year-old filly 6. Sister Wife didn’t fire a shot on debut at Muswellbrook in soft 7, but will find this a little easier.

How to play it: Pop’s Glory to win
Odds and Evens: Split

Testing finish, with a stack of hopes. Progressive three-year-old Tamworth filly 9. Crimson Rose is first-up without an official trial, but should come to hand quickly over this trip, with top country rider aboard. High-class sire won his only start in heavy ground.

Dangers: Consistent three-year-old Newcastle filly 3. Frozen In Time resumes for a second prep off a nice open trial, and didn’t miss a place in four runs last winter, including a maiden win at Muswellbrook in soft ground. Inside draw late in the day is the biggest concern. Muswellbrook six-year-old  gelding 6. Voyages also resumes without a public trial, but the blinkers go on and gets to a track where he can be ridden quietly back in the field. Flew home to win his maiden under 59kg last spring. Local five-year-old mare 10. Hardspot hasn’t started for more than nine months, but has trialled well for strong stable. Watch the market on four-year-old Wyong gelding 4. Egyptian Pharoah who resumes without a public trial, but has ability. Down in weight, although must be a query fresh on wet track.