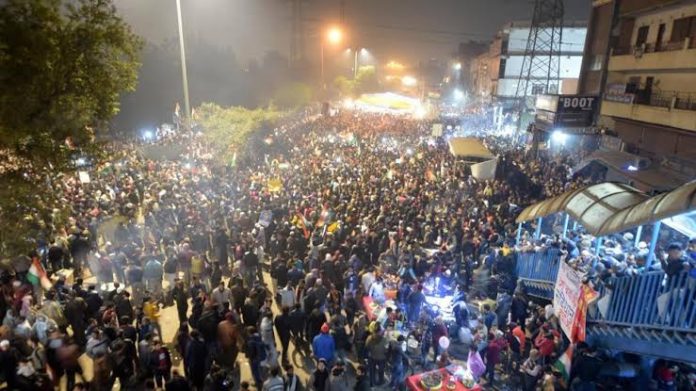 The apex court on Monday stated that Shaheen Bagh protesters cannot carry out indefinite protests in common area inconveniencing people for eternity. It also issued notices to the Centre, Delhi government and the Delhi Police on the pleas seeking removal protesters from Shaheen Bagh.

Regarding petitions seeking the removal of anti-CAA protesters from Shaheen Bagh, the Supreme Court said, “There is a law and people have a complaint against it. The issue is pending in the court. Despite the matter pending in the court, some people are protesting. They are entitled to their protest.”

However, a bench comprising of Justice Sanjay Kishan Kaul and Justice KM Joseph said that the protests cannot continue on a public road for perpetuity. It said that there must be identified areas where such protests can be carried out.

“If you want to protest, there can be some area where you protest. You cannot block a public road. There must be designated areas of protest,” the court said.

The counsel for the petitioner seeking removal of Shaheen Bagh protests sought interim directions citing inconvenience. However, the bench issued a notification on the plea but refused to grant interim relief.

The court stated that the protests that have now been going on for more than 50 days can go a little longer. Declining interim relief, the bench has given February 17 the next date of hearing on the matter.

For about 55 days now, protesters in Shaheen Bagh have blocked one of the busiest thoroughfares in the national capital in protest against the enactment of the Citizenship Amendment Act that intends to grant citizenship to a persecuted minorities from the neighbouring countries of Pakistan, Bangladesh and Afghanistan. The blockade of the road is causing massive inconvenience to lakhs of daily commuters who now have to circumvent the blocked road to reach their destination.

In addition, there have been allegations that the protesters at Shaheen Bagh are treating it as an independent enclave, with strict regulations enforced in allowing on who joins them in their protest based on their ideological inclinations. Recently, political analyst Gunja Kapoor was heckled and was tried to convert into Islam by the unruly protesters at Shaheen Bagh for wearing a Burkha and entering the protest area. Earlier, Shaheen Bagh protesters were also accused of shouting anti-India and pro-Jinnah slogans.