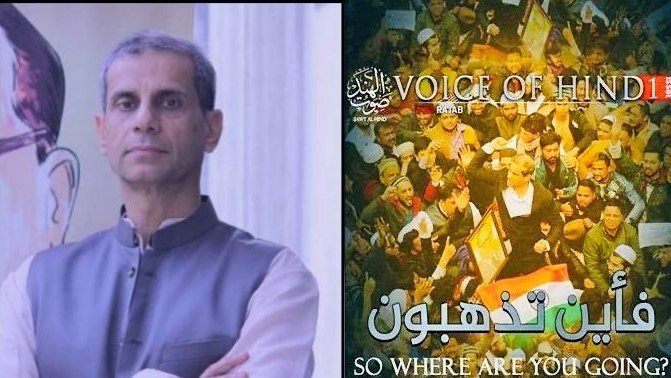 A pro-ISIS media outlet has launched an India-centric publication as the country is going through a period of communal turmoil. The publication titled ‘Voice of Hind’ was issued by Al-Qitaal Media Center and Junudul Khilafah al-Hind as per its cover page and features a senior Indian lawyer on its cover page.

Meanwhile as the madness unfolds… pro #ISIS publication group launches an India focused product…..sensing this as an opportunity to ride the communal cleavages and the incompetence of the state to handle lunatics and radicals – via @KabirTaneja pic.twitter.com/LfmJ7dIcPg

The person who is the main focus on the cover page is senior lawyer Mahmood Paracha who has been accused of inciting communal hatred in the past. In a press conference last year, Shia cleric Maulana Kalbe Jawad and Mahmood Paracha announced that they would be setting up a camp in Lucknow to teach Muslims and Dalits about the ‘right to self-defence’ and how to apply for a firearm licence.

Mahmood Pracha had cited the incidents of mob lynchings and the Sonbhadra massacre as reasons for conducting the camp. According to him, those events wouldn’t have occurred if the victims had legal firearms to defend themselves. They were basically planning to raise an armed militia to combat ‘mob lynchings’, using licenced weapons. Later, Mahmood Paracha was seen holding that training camp inside a Lucknow Mosque where he was training Muslims about how to fill forms for licences and acquire firearms, even though an FIR had been registered against him for his incendiary speech.

According to Twitter handle @KashmirOSINT, that research on Kashmir and militancy, the first part of the magazine talks about IS-JK militants in Kashmir, all of them dead now, shows some pictures and talks about how they started jihad in Kashmir and achieved their goal. Then features a message from active ISHP militant, identified as ‘Abu Zakariya Al-Hindi’.

Reportedly, He talks about Indian scholars and Muslims, criticises Muslims for following “wicked scholars like Mahmoud Madani and Arshad Madani”. Also says that “Owasi and Kanhaiya Kumar are misguiding the Indian Muslim youth”, asks Muslims to reject and fight them.

Further, the magazine reportedly says that there is no place for Nationalism in Islam and Muslims should reject the notion and join the caliphate instead.

The next chapter is on nationalism and I see usual propaganda, references to Quran and Hadith in the chapter, like “there’s no place for nationalism in Islam. Khilafa is the only way” etc. Asks Indian Muslims to reject nationalism & strive for Caliphate by joining Islamic State.

ISIS has been trying to gain a foothold in India for quite some time. Security agencies have arrested well over a hundred individuals thus far for their links to ISIS. Last year in November, the police had arrested three individuals from a suspected ISIS module in Assam, India. The arrested individuals were planning an IED blast at the ‘Rasmela’ a local fair in Assam and planning to replicate it later in Delhi.

In January this year, security agencies had busted an ISIS module in Delhi and only a day later, another ISIS operative was nabbed at Vadodara. Last month, the investigation into the murder of Wilson, an ASI of Police in Tamil Nadu, revealed that his murderers were “self-declared jihadists” who killed the police personnel to avenge the arrest of their ISIS associates by the Tamil Nadu police in Bengaluru.