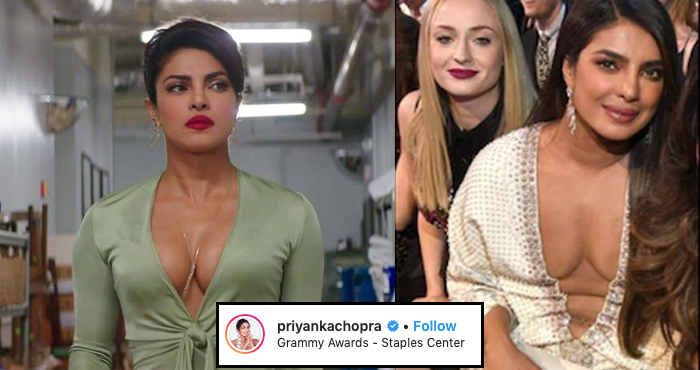 Bollywood actress, Priyanka Chopra was recently trolled for her outfit at the 62nd Annual Grammy Awards held on the 26th of this month in the Staples Centre, Los Angeles, California. Critics said she had failed miserably at copying another celebrity, Jennifer Lopez who had worn a similar outfit in the past. Some sanskaari watchdogs were mad that her dress did not hide her belly.

Today, Priyanka posted her picture on Instagram with a detailed caption that seems like her response to all the hatred she has been receiving in the past couple of days.

“I seem to be thinking what a crazy beginning of the year it’s been, and we are only in January. Love the ones you love. Live the life you want to live…with all the troubles in this world at the moment, be kind to yourself and everyone around you. I’m so grateful for the kindness I have received, and even when I have not…I some how have. Be kind to the ones around you. It matters. Life is a gift. “

Priyanka said, it was important for one to be kind to themselves and to everyone around them considering it was a difficult time for everyone around the globe probably referring to the terrible situation in Australia for the past couple of months or the death of the legendary basketball player, Kobe Bryant which happened on the same day as the Grammys.

There are a lot of terrible things happening around the globe right now so we can only assume, we are unable to pinpoint. Regardless, Priyanka’s message is that life is a gift so one should live it the way they wanted to while being kind to others.

Priyanka’s husband and popular American singer, Nick Jonas, who is a member of the famous Jonas Brothers band was also trolled at the same event. Nick performed two new singles with spinach in his teeth. Nick acknowledged it with a hilarious tweet.