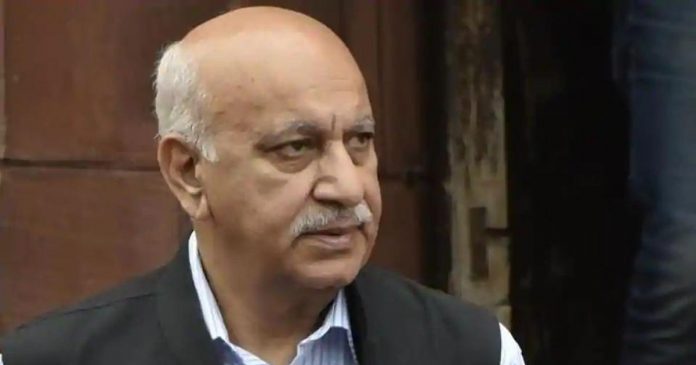 New Delhi: Former Union Minister M J Akbar told a Delhi court Friday that scribe Priya Ramani’s accusations of sexual misconduct against him in the wake of #MeToo movement in 2018 were ‘figment of her imagination’ and caused him ‘great humiliation’ and ‘irreparably damaged his reputation’.

Akbar made the allegations before Additional Chief Metropolitan Magistrate Vishal Pahuja through his lawyer during the final hearing of a private criminal defamation complaint filed by him against Ramani after his name cropped up on social media as the #MeToo campaign raged on in India.

Ramani in 2018 accused Akbar of sexual misconduct around 20 years ago when he was a journalist. She worked at the Asian Age from January to October in 1994.

Senior advocate Geeta Luthra, appearing for Akbar, said that if there was any grievance, it had to be raised then and there before the appropriate authority.

“Allegations are a figment of her (Ramani’s) imagination. Things that I (Akbar) took 49-45 years to build, without any sense of responsibility, were trashed,” Luthra said.

“Can you expect a man to answer to something which you allege happened 20-25 years ago? Why now? What is the public good that you are claiming? If there is a grievance, it has to be raised then and there before the appropriate authority… I don’t want to jump onto a political bandwagon,” she added.

“My whole life has gone without any controversy… Can you mar anybody’s life without any impunity, without any evidence? We can’t be a social media country,” she said.

While referring to an article written by Ramani, which was allegedly termed Akbar a ‘predator’ and a ‘pervert’, she said the allegations were ‘false narrative’.

“This has caused great humiliation to Akbar and his reputation has been irreparably damaged. He developed a reputation and that’s why he was a Minister (of State) of External Affairs. He wrote extensively on South Asia. In that sense, the country needs such people,” she said.

The court will further hear the matter on February 28.

Akbar has denied all the allegations of sexual harassment against the women, who came forward during #MeToo campaign against him.

Ramani accused Akbar of sexual misconduct when he was a journalist, a charge denied by him.

Akbar had earlier told the court that the allegations made in an article in the ‘Vogue’ and the subsequent tweets were defamatory on the face of it as the complainant had deposed them to be false and imaginary and that an ‘immediate damage’ was caused to him due to the ‘false’ allegations by Ramani.

Ramani had earlier told the court that her ‘disclosure’ of alleged sexual harassment by Akbar has come at ‘a great personal cost’ and she had ‘nothing to gain’ from it.

She had said her move would empower women to speak up and make them understand their rights at workplace.

Several women came up with accounts of the alleged sexual harassment by him while they were working as journalists under Akbar.

He has termed the allegations ‘false, fabricated and deeply distressing’ and said he was taking appropriate legal action against them.