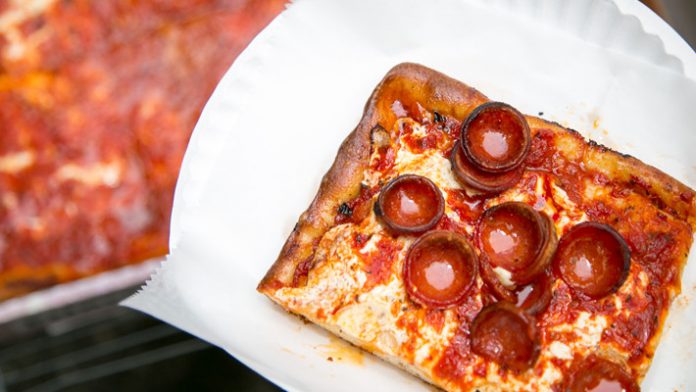 In celebration of National Pizza Day, legendary New York pizzeria Prince Street Pizza is opening up shop on the Sunset Strip in West Hollywood for a limited three-day run. The New York staple, a favorite amongst celebrities and locals alike, and the home of the “SoHo Slice,” has also linked up with streetwear label Pizza Slime for a limited run of merch that celebrates Prince Street Pizza’s rare visit to the West Coast.

If you’re in LA this weekend, you have no reason to not try Prince Street Pizza. It’s not every day you can get an authentic New York slice in Los Angeles, and if you don’t want to make the trek to Sunset, you can get two slices and a Pizza Slime t-shirt for $28 delivered in a customized box straight to your door through Uber Eats and the LA-based app OFF THE MENU.

Full disclosure, I’ve never had Prince Street Pizza in New York City, but I got a couple of slices at a preview of the pop-up last night and in my opinion, a trek down Sunset Boulevard, even during the work rush hour, is worth it for the experience of a fresh slice in a space that feels authentically New York. While I’ve never visited Prince Street Pizza, I am gratefully familiar with the wonders of New York pizza and I damn sure know what the inside of a pizzeria looks like. I was taken aback at just how well Prince Street Pizza captured the vibe and experience of a New York pizzeria and made it work so convincingly this close to the Hollywood Hills.

It’s weird to be on Sunset and feel like you’re not in LA, but the way people spilled out into the street from the too crowded pop-up, eating their fresh slices while standing out on the sidewalk truly made me feel like I was somewhere else, and I’m an LA native. When pizza is so good that it transports your psyche, you know that’s some good pie.

Prince Street Pizza specializes in a Sicilian pie, each slice is square-cut with a crunchy crispy crust, a doughy inch-thick bread, and perfectly melted mozzarella. At the pop-up, pie after pie of Prince Street’s Prince Perfection and Spicy Spring pizzas were on constant rotation and the aroma of melted fresh mozzarella was strong enough to be smelled a block down, which definitely adds to the experience.

Prince Street manages to please a lot of different pizza tastes in a single slice. If you like a crispy crunchy crust, that’s well represented with a perfectly toasted outer that adds the structural support you need to keep the ingredients on the pie rather than your plate, but at the same time each bite is soft, bready, and greasy, giving fans of a thick hearty pizza something to swoon over. The Prince Perfection keeps things simple and vegetarian-friendly with a heavy dose of messy flavor-packed sauce and cheese, but the more popular of the two seemed to be the Spicy Spring, with its Fra Diavolo sauce and its grease-producing spicy pepperoni.

Both are good, but at $6 a slice, you’re better off grabbing the Spicy Spring. Each slice of the Spicy Spring is hearty enough to make a meal out of, but be warned — you’re going to want two.

The Prince Street Pizza pop-up is located at 8947 W Sunset Blvd, West Hollywood, CA 90069 and will be open this Friday and Saturday from 11:30 am until 2:00 am, and Sunday from 12:00 pm to 2:00 am. If you can’t make it out, hit up Uber Eats and get your slices delivered to your door, and be sure to check out the OFF THE MENU app, which will be offering one free slice from Prince Street Pizza, as well as a week of deals for special one-off pizzas from LA pizza spots like Nancy Silverton’s Pizzeria Mozza, or Erick Black’s Ugly Drum.

The Pizza Slime merch will be sold on sight at the Prince Street Pizza pop-up and online starting on February 9th, check out the full collection below.