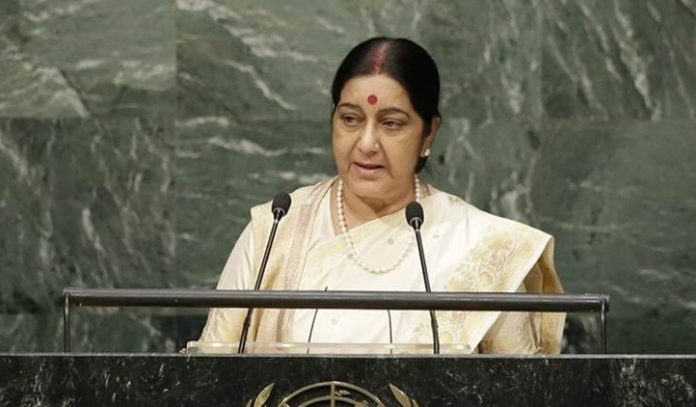 A fitting tribute to a great public figure who continues to inspire us.

This announcement was made in the light of the sixty-eighth birthday of Sushma Swaraj on 14 February.

We all fondly remember Smt Sushma Swaraj, who would have turned 68 tomorrow. The #MEA family misses her in particular.

The Pravasi Bharatiya Kendra in New Delhi was inaugurated by prime minister Narendra Modi on October 2, 2016. The decision to construct it was taken by the Atal Bihari Vajpayee government, while the foundation stone was laid by former PM Manmohan Singh in 2011. The Kendra is dedicated to the welfare of the Indian diaspora. It has been developed as a hub of activities for sustainable, symbiotic and mutually rewarding economic, social and cultural engagement between India and its Diaspora. Activities, seminars, events, workshops pertaining to the Indian Diaspora are organised at the Pravasi Bharatiya Kendra, now renamed as Sushma Swaraj Bhawan.

Reacting to this announcement by the Ministry of External Affairs spokesperson twitter handle, Governor Swaraj, husband of Sushma Swaraj tweeted in gratitude from him.

Thank you Prime Minister @narendramodi for this kind gesture on the eve of her birthday. We as a family are grateful for this honour.
– Bansuri Swaraj & @governorswaraj @AmitShah @DrSJaishankar @JPNadda https://t.co/kxyDEjmoBn

Sushma Swaraj was a prominent leader of the Bharatiya Janata Party, had been the youngest cabinet minister in the history of India, the first woman Chief Minister of Delhi and of course one of the longest standing woman politicians of the country.  As a Union Minister in the NDA government, she handled various portfolios and brought radical and important changes in the ministries. She was known as one of the most responsive ministers while handling the Ministry of External Affairs and also known as one of the most popular foreign ministers ever.

Renaming the institutions after a giant like Sushma Swaraj is a tribute to a brilliant leader like her.