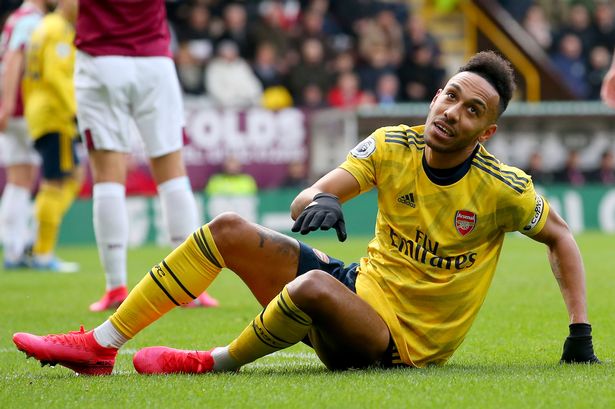 Pierre-Emerick Aubameyang has hit out at reports over his Arsenal future with the striker having been linked with a move away from the club.

Aubameyang’s contract at the Emirates ends next summer and there has been plenty of suggestion that the Gabonese star could favour a fresh challenge.

Inter Milan and Barcelona have both been linked with moves for the 30-year-old, who is the Premier League’s joint leading goalscorer this season.

But with plenty of stories surrounding Aubameyang’s future about, the striker has hit out at speculation.

An Arsenal fan account tweeted on Wednesday: “Arsenal have held positive contract discussions with Pierre-Emerick Aubameyang, but the player wants to see if the club will be playing Champions League football next season.”

And the forward responded with: “Why they Talk about what they don’t Know [shrugging emoji]”

Aubameyang has impressed in recent weeks despite the doubts over his future looming over his head.

The Arsenal club captain has scored six times in nine appearances since Mikel Arteta took over in December, including two against Everton on Sunday.

And the Gunners boss hopes that the upturn in form will see the striker choose to stay in north London. 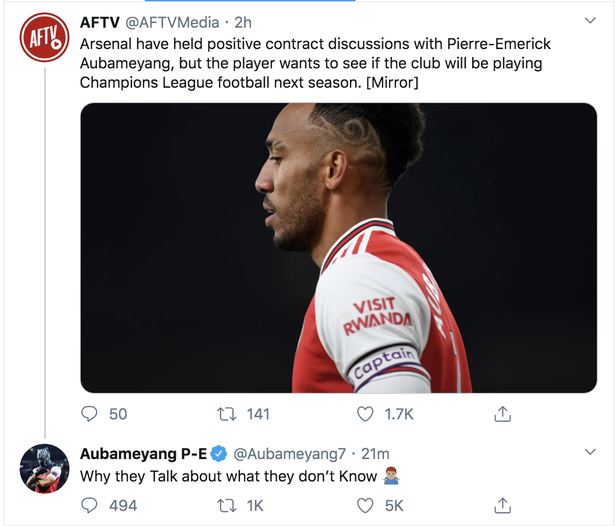 “Hopefully not just the wins, but as well what we are trying to do,” Arteta said.

“That he really enjoys on the pitch every time he goes, that he feels very much part of what we’re trying to build here. And I think he’s with that mindset at the moment. I think it’s been tough for him.

“You know a player like him, there’s been a lot of disappointments in the last few months and years because he has big expectations.

“You know he wants to play for the biggest club in the biggest tournaments, and be up there with the best players in the world.

“And we have to try to support him and give him everything at the club so he really feels fulfilled here. That’s the challenge I have.”