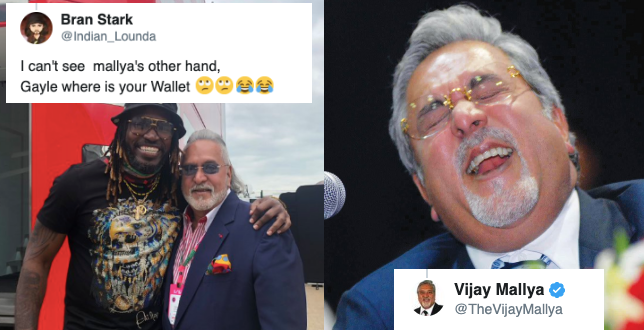 Vijay Mallya, the Indian liquor baron who is facing extradition to India over charges of fraud and money laundering amounting to as much as Rs. 9,000 crore, has made headlines again for all the wrong reasons.

Mallya, who attended Formula One qualifying session at the Silverstone Grand Prixrecently, bumped into West Indies batsman Chris Gayle and things went a little downhill from there on social media!

Now, the Gayle-Mallya relationship goes long back to when Gayle played in the IPL for Royal Challengers Bangalore, a team owned by Mallya. Hence, when the two met, a picture together was a given. Chris Gayle later took to Twitter to post their picture.

What followed next was a massive trolling of Mallya by desi Twitter. From calling him a ‘chor’ to asking him to come back to India, netizens didn’t hold back from attacking the businessman!

However, Vijay Mallya wouldn’t keep quiet and lashed back at the trolls for calling him a thief. In a comment below the picture, Mallya wrote: “Great to catch up with the Universe Boss and my dear friend. For all those of you losers who call me CHOR, ask your own Banks to take their full money that I am offering for the past one year. Then decide on who is CHOR.”

Netizens couldn’t keep calm and yet again subjected him to another round of trolling!