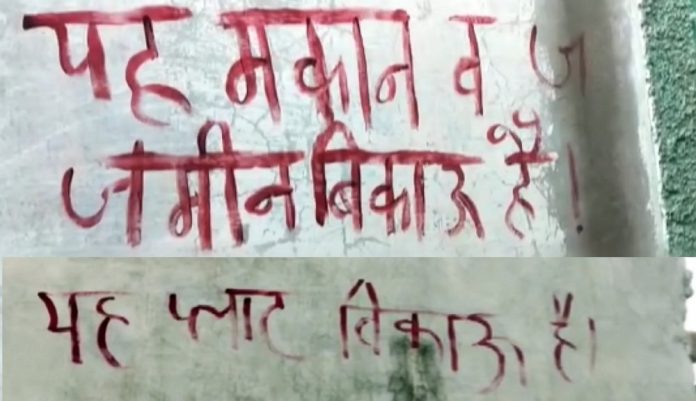 People in a village in Firozabad district in Uttar Pradesh fleeing the village due to fake cases registered against them under the SC/ST Act. According to reports, residents of Gothua village are selling their homes and moving to other places due to harassment of fake cases. Villagers have written on the outside walls and doors of their houses that they will be sold.

In a recent incident, on January 27, an argument among children escalated to a full-scale fight among adults, with two sides physically assaulting each other. After that the side belonging to schedules caste families lodged a complaint against the other side under the SC/ST Act, alleging that they used casteist remarks against them. This has created huge problems for the villagers facing the charges as it is a very strict act.

Firozabad: People are selling homes in Gothua village allegedly due to registration of fake cases under the SC/ST Act against them. A villager says,”Every year,fake cases are lodged against us under SC/ST Act over trivial issues.We are fed up with it & want to leave the village.” pic.twitter.com/XQHn9i6H4s

According to villagers, the people belonging scheduled caste have already sent 14 persons from the village on false charges under the SC/ST Act. They allege now again preparations for filing fake cases have been started. The villagers also allege that those youths are specifically targeted by fake charges who are preparing for jobs. After cases under the law are registered against the youths, their future is destroyed as they don’t get any job after that.

Talking to media, a villager said, if even goats of general category farmers enter the farms of Dalits, they go to the police station and file case. He said that their women tear their own clothes and then file false cases against general category youths.

A local police officer Ajay Chouhan said that they had assured the villagers that they will get justice as law is equal to all. He said that nobody has left the village yet, but they are scared that cases will be filed against them in minor incidents. He appealed everyone to abide by the law, no injustice will be done.