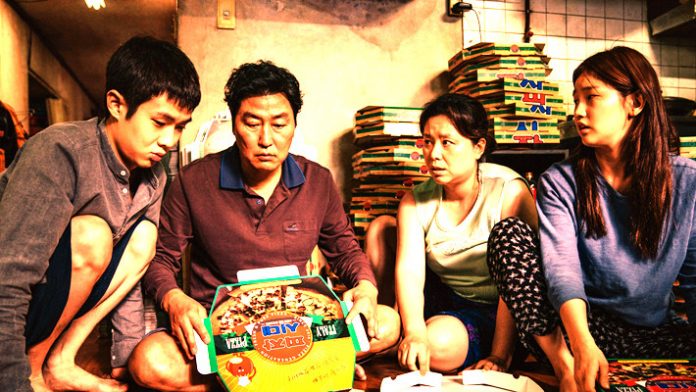 Korean tragicomedy Parasite has emerged as a frontrunner in this year’s Oscar race, a puzzling underdog story for moviegoers accustomed to seeing English-language films win top honors during awards season. There’s been pushback of course – the prejudices of older Academy voters are showing – and even director Bong Joon-Ho, who delivered a powerful Golden Globes speech about widening our cinematic horizons through subtitles and playfully called the Oscars a “local” awards ceremony, seems mildly amused that his family drama is on the receiving end of such critical praise. But if you’ve seen the film, which centers on a poor family scamming a much wealthier couple by infiltrating their home as the hired help, you already know why it’s able to cross-cultural barriers. That’s because the story of Parasite is universal, and that’s not a good thing.

And the world is dark, quite literally, for the Kim family, who we meet living in a semi-basement dwelling devoid of any natural light. Their toilet is closer to Heaven than their kitchen table, and they’re forced to watch neighborhood drunks piss outside their window. They’re cockroaches, living in squalor who choke down fumigation fumes as a cheap way to keep their pest problem in check.

It’s only when Ki-woo nabs a tutoring position thanks to his university friend that the Kim family begins to enjoy a brighter existence. The film, which flits between the slums of Seoul and the rich dwellings of the city’s elite, uses light and the levels necessary to reach it, as a metaphor for the insurmountable wealth gap the Kim family contends with. When Ki-woo enters the Park family’s home, it’s bathed in a soft glow, highlighted by natural sunlight streaming in from a neatly manicured garden, one we see through floor-to-ceiling glass windows. If the Kim family lives in the shadows, scurrying around their basement home and taking underground public transport, the Park family lives an ignorantly blissful life positioned high above them.

Bong is a director who loves visuals, so he also employs art — specifically the crude self-portraits drawn by the Park family’s unruly son — to represent the class divide.

Ki-woo is able to deceive the child’s mother and get his sister hired, having her pose as an in-demand art therapist named Jessica. Jessica, a shrewd, incredibly talented artist in her own right, spends time observing the young boy’s paintings, remarking on his use of color, convincing his mother that the darkness found in his portraits symbolizes a deeper, psychological problem. Darkness here is used as a weapon by the “parasites” who live in it, with Jessica quickly assessing her host and targeting her worst fears with it.

It’s easy to feel sympathy for the Park family. They’re wealthy elitists, sure, but they’re also hopelessly naïve and seemingly decent people. We may root for the Kim family to succeed in their slick con – and they do for a while, getting Mr. Kim a job as the family’s chauffeur after the discovery of some strategically placed panties and Mrs. Kim the role as the family’s housekeeper after convincing Mrs. Park her last suffered from tuberculosis – but we also recognize the violation happening to them, how they’re unknowingly inviting chaos into their home. Like Mr. Kim, we think they’re nice, even though they are quite rich. But while they’re never the clear villains of this story, the better assessment of the Park family belongs to Mrs. Kim. They’re nice because they’re rich.

And Bong proves that, showing us how frivolous Mrs. Park can be when it comes to material things. She prefers American made toy tipis, she spends ridiculous amounts of money on garden parties, she demands a bowl of Ram-don – a cheap, popular South Korean dish – be garnished with prime cuts of sirloin for her young son. In fact, food is another vehicle Bong uses to show the wealth disparity between these two families. The Parks, like the fresh-cut cube steaks, are people with inherent value. They deem themselves better because of their affluence. The Kims, like the cheap, instant noodles, make up the bulk of the dish, they do the most work but rarely receive credit for it. They’re easily attained, easily dispensable, and will never achieve the same status as their wealthier counterparts.

But it’s the sense of smell that plays the biggest role in bringing this delicate imbalance to its breaking point. The film’s ending, a fast-paced hodge-podge of bloody violence and birthday cakes and thinly-veiled metaphors, relies on a specific smell to break the capitalist wheel.

Mr. Park, a polished tech tycoon who espouses the merits of maintaining a “line” between himself and his servants, spends most of the movie lamenting his driver, Mr. Park’s, pungent body odor. He describes it in detail as he has sex with his wife in the family living room – with the Kim family hiding beneath the multi-level coffee table – joking that he smells like turnip, or even worse, the subway. A man like Mr. Park, who employs a driver to ferry him around the city in a pricey Mercedes, looks upon something as common and necessary to the poorer classes as public transportation with disgust. He can’t know that the Kims all smell the same because they live in a semi-basement apartment together, an apartment that floods when the rain comes. His wife doesn’t realize Mr. Kim has waded through sewage and slept in a public gymnasium, that he’s wearing someone else’s clothes when she props her bare feet next to his head and quietly rolls the window down in the car to escape his stench. But Mr. Kim knows, and it’s that knowing, that blatant abhorrence to a fact of his life he just can’t control, that causes him to finally snap.

It’s when Mr. Park turns his nose up at the dead body of someone even lower in the social hierarchy than Mr. Kim himself, when he nearly retches as Mr. Kim’s daughter bleeds out on his lawn, that the unspoken divide between rich and poor is crossed. Unlike other films that show this kind of rebellion in a heroic light – they’re fighting the man, they’re robbing from the rich and giving to the poor, etc. – Mr. Kim’s moment of resentment and blinding rage doesn’t end well for himself, or his family.

And that may be Bong’s clearest message. Parasite uses all of our senses to convince us of the ever-present chasm between the haves and the have nots, a gulf that will always exist whether we choose to see it or not, but he doesn’t offer a way to traverse it, to overcome it. Because there might not be one. And that’s fatalistic and more than a little depressing, but, we’d argue, that’s also what makes this film so relatable, so real, for so many different people. It’s what also makes it a potential Oscar winner.