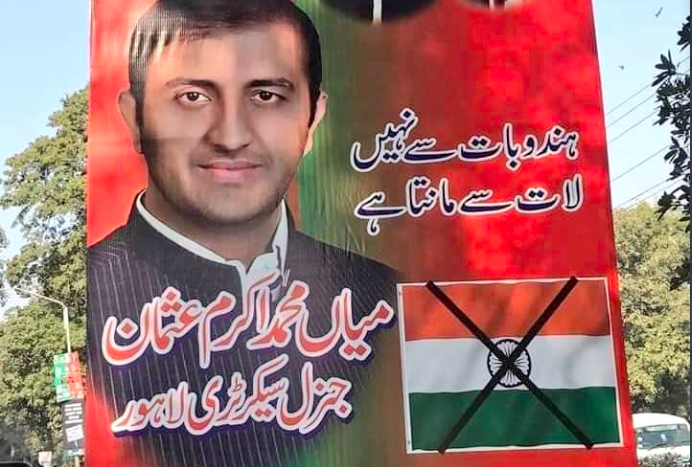 On ‘Kashmir Solidarity Day’ which is observed in Pakistan and Kashmiri separatists, Pakistani leader spewed venom against the Hindus by putting up a poster declaring that Hindus can be taught a lesson only by violence, not dialogue.

As per a tweet shared by Pakistani journalist Naila Inayat, leader of Pakistan’s ruling party PTI had put up a poster in Lahore which said, “Hindu baat se nahin, laat se maanta hai” in Urdu. The poster also carried photographs of Pakistan PM Imran Khan and Mohammad Ali Jinnah, founder of Pakistan who led the two-nation theory. A flag of India ‘cancelled out’ was also added on the poster.

In a five-second clip, he could be heard saying, “Narendra Modi aur Hinduon mein ehsas nahin hai, inmein insaniyat nahin hai, yeh darinde hai. (Narendra Modi and Hindus don’t get it. They do not have humanity, they are violent animals)”.

The bigoted poster only gives a glimpse of how the atrocities and persecution against the Hindus and other religious minorities in Pakistan is institutionalised. Hindus in Pakistan do not have religious freedom and minorities there are under constant threat. There have been innumerable cases of forceful religious conversion where Hindu girls were abducted and forcefully converted.

The forceful conversion programs have often been unleashed against the minorities especially Christians, Sikhs and Hindus living in Pakistan with utmost brutality.

This violence against Hindus in Pakistan is now a common affair. A series of abductions and forceful conversions of minority Hindu and Sikh girls had recently rocked the country. In March, two underage Hindu girls Raveena (13) and Reena (15) were abducted from the Ghotki in Pakistan’s Sindh on the eve of Holi. The girls were later forcefully converted and married off to older Muslim men.