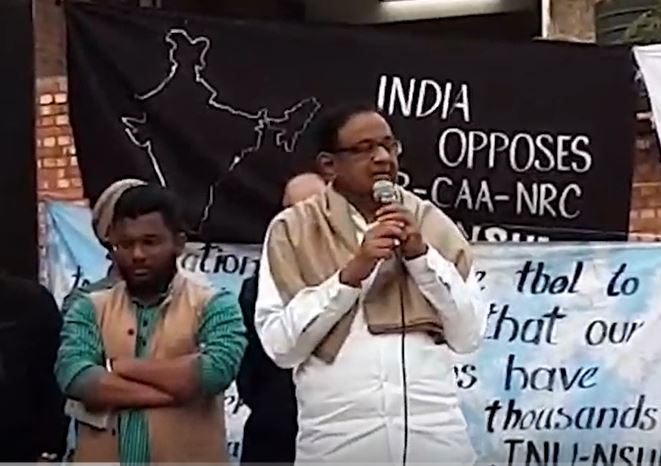 Replying to a question by a student asking for the best course of action if the CAA is upheld by the Supreme court, Chidambaram suggested: “When they touch the excluded…they will only be Muslims, try to identify and throw them out, declare them Stateless. There must be a huge mass movement resisting any Muslim being thrown out or kept in detention camps.”

Speaking at the JNU campus in Delhi, Chidambaram said that CAA was an outcome of the “NRC fiasco” in Assam which left 19 lakh people out of NRC. The CAA was brought to accommodate 12 lakh Hindus out of the 19 lakh people who could not be included in the final NRC in Assam, the former home and finance minister claimed.

Stating that the CAA harms the foundation of the Indian Constitution, Chidambaram said: “They (BJP Government) have cut the foundation of India’s citizenship premise. They have cut at the premise by saying that citizenship for a certain set of people will be based on religion, not on territory. There are many learned people, who say, so what? That is the superficial view. The deeper cut is, you are changing the basis of citizenship to religion from territory.”

Read- Is the anti-CAA protests a test case for Muslims to find their true political worth in India?

He also said Congress believes the CAA must be repealed and there should be a political struggle so that National Population Register (NPR) is pushed beyond 2024.

Notably, the Congress party has been vociferously opposing the new law that provides citizenship to persecuted minorities from neighbouring Islamic States tooth and nail. Many Congress-ruled States have refused to implement the law passed by both Houses of the Parliament and have been spreading canards about the Ac, even though they have no authority to refuse a central law passed by parliament.

In fact, sufficient proofs have also emerged which have pointed to the nexus between Congress and Islamists in stoking anti-CAA riots.

Read- Intellectuals against Citizenship Amendment Act: The art of lying and use of muscle power

In the Congress manifesto released before Delhi Assembly elections, the party promised to not implement the National Population Register (NPR) and National Register of Citizens (NRC) in its present form. The grand old party also vowed to challenge the Citizenship Amendment Act (CAA) in the apex court.

NPR is a part of the census and was earlier prepared in 2010-2011 along with the 2011 Census during the Congress-led UPA government. CAA aims to fast-track the citizenship of minorities from three neighbouring countries of Pakistan, Bangladesh and Afghanistan who have migrated to India illegally, owing to religious persecution. As for a nationwide NRC, no draft has been laid down by the government. The exercise to update the NRC in Assam was initiated during the Congress government in the state, while by the time it was completed BJP had come to power.

Hard-hitting facts, however, have not stopped the Congress party from casting aspersions about CAA-NRC-NPR.