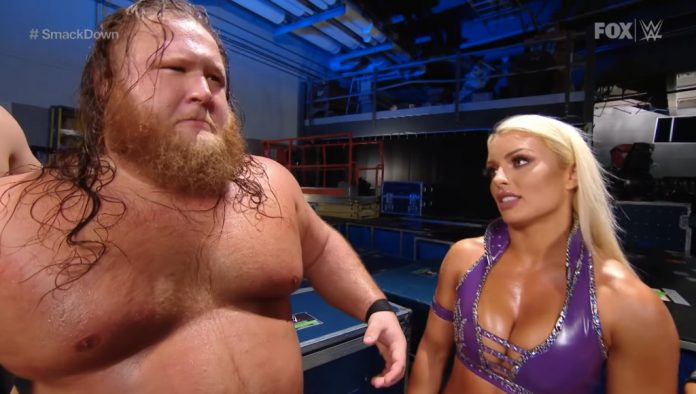 I think most of us who watch WWE have been surprised by how charming the whole Mandy Rose/Otis romance story has remained, when so many relationship angles in WWE start out kind of gross and only get grosser. We were all waiting for the hot girl to embarrass the funny fat guy, but instead she was charmed by him, and that makes it seem honestly kind of sweet.

The real secret to their angle seems to be that Otis and Mandy have real chemistry, because they’re really friends with each other. In fact, the whole thing goes back to their NXT days, and how they’d interact backstage. On the new episode of Corey Graves’ After the Bell podcast, Otis explains:

Honestly, when I used to see pretty girls, I was super duper shy and would not say a word to them. I’d be a little nervous and not talk normally without stuttering. So nowadays– you get a little more confidence as you get older. It’s Mandy. She’s awesome. She grew up with brothers. The fans ask me, “How’s she behind the curtain?” I say, “She’s awesome.” She jokes around, you know.

I started doing the Chris Farley stuff to her at the Performance Center. Like she’d start walking, and I’d go, “How you doing, my beautiful peach?” And I’d call Sonya my plum. Then coach Sara Amato goes, “We need everyone to have a fruit nickname.” I go “That’s hard to do,” because we’d call her a banana or a strawberry something in between there. It got out of hand because I was pretty good at nicknames.

From the Performance Center the angle moved to social media, where fans took notice, and that made its way onto WWE Smackdown.

Then just one day, I was sitting down, and she was posting all of her beautiful pictures online. I said, “What if I post a picture of her modeling pics and say, ‘You look great babe’?” Pretty soon that one post had more comments than actual likes because there were so many people that were just confused as to what was going on. A week later on Google, when you typed in “Otis,” it said, “Otis and Mandy: Are they really married?” Something like that on the search bar. I’m like oh man, this is kind of getting a little attention here. So I just kept on like pretend creeping here on a post saying, “Hey, you look great in this.” I would pretend she was my girlfriend, and it was obvious, at the time, she’s not. It was just kind of a thing I was goofing around with. Finally got it going on in the WWE world. She’s awesome to work with too, man. It’s basically working for free.

The whole interview is worth a listen. Otis also talks about how a lot of his character’s mannerisms are based on his mother, who I really hope we get to see on TV some day. He also talks about taking inspiration from Chris Farley, saying, “I don’t think there’s someone that plays Chris Farley better than me.”