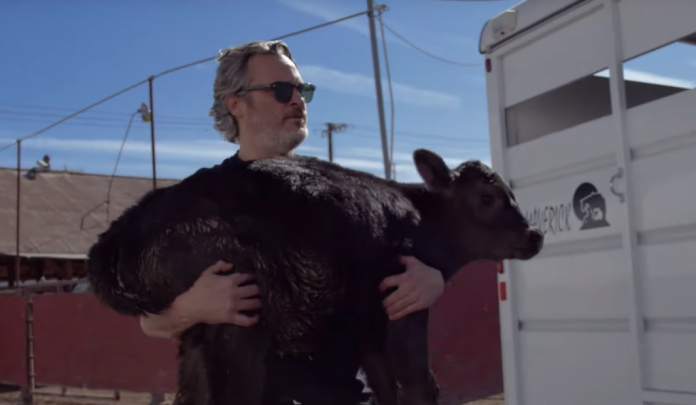 Two days after winning the Oscar for Best Actor for his stellar performance as the lead in Joker, Joaquin Phoenix rescued a cow and her calf from a slaughterhouse in Los Angeles, California. Phoenix named the cow and her baby ‘Liberty’ and ‘Indigo’ respectively. They have been taken to Farm Sanctuary, an American animal protection organization.

In a statement, Joaquin Phoenix said, “I never thought I’d find friendship in a slaughterhouse, but meeting Anthony and opening my heart to his, I realise we might have more in common than we do differences. Without his act of kindness, Liberty and her baby calf, Indigo, would have met a terrible demise.” He added, “Although we will continue to fight for the liberation of all animals who suffer in these oppressive systems, we must take pause to acknowledge and celebrate the victories, and the people who helped achieve them.”

Joaquin Phoenix said, “Liberty and Indigo will never experience cruelty or the touch of a rough hand. My hope is, as we watch baby Indigo grow up with her mom Liberty at Farm Sanctuary, that we’ll always remember that friendships can emerge in the most unexpected places; and no matter our differences, kindness and compassion should rule everything around us.”

“Shaun Monson, Amy Jean Davis, and the entire LA Animal Save community, have taken their pain of bearing witness and turned it into effective, diplomatic advocacy for the voiceless. As a result, Liberty and Indigo will never experience cruelty or the touch of a rough hand. My hope is, as we watch baby Indigo grow up with her mom Liberty at Farm Sanctuary, that we’ll always remember that friendships can emerge in the most unexpected places; and no matter our differences, kindness and compassion should rule everything around us,” Joaquin Phoenix continued.

“I don’t really need any science to see with my own eyes and hear how an animal responds to pain, right? That’s undeniable,” Joaquin Phoenix told Anthony Di Maria, the owner of the slaughterhouse. Di Maria cares for the animals in his own and says that the calf is never separated from its mother. They also engage in a respectful debate about the nature of the slaughter.

Di Maria calls it ‘harvesting’ while Joaquin Phoenix insists that it is murder. When the argument goes nowhere, Joaquin Phoenix proceeds to take away the animals to Farm Sanctuary. “Any time a calf is born on my property, I refuse to take the mother away from its baby, because I won’t do it,” Di Maria told Phoneix in the video, which Monson directed. But, Di Maria added, “any animal that’s here is used for consumption. That’s the slaughterhouse business.”

Joaquin Phoenix is himself a Vegan and has professed great love for cows. After winning his Oscar, he had said in his speech, “I think whether we’re talking about gender inequality or racism or queer rights or indigenous rights or animal rights, we’re talking about the fight against injustice — against the belief that one nation, one race, one gender or one species has the right to dominate, control, and use and exploit another with impunity.”

“I think that we’ve become very disconnected from the natural world and, many of us, what we’re guilty of is an egocentric worldview, the belief that we’re the centre of the universe. We go into the natural world, and we plunder it for its resources. We feel entitled to artificially inseminate a cow, and when she gives birth, we steal her baby even though her cries of anguish are unmistakable. Then we take her milk that’s intended for her calf, and we put it in our coffee and our cereal,” Joaquin Phoenix stated.

He added, “I think we fear the idea of personal change because we think that we have to sacrifice something, to give something up. But human beings at our best are so inventive and creative and ingenious, and I think that when we use love and compassion as our guiding principles, we can create, develop, and implement systems of change that are beneficial to all sentient beings and to the environment.”