Home Internet One dead, 20 injured as bus overturns in Nayagarh 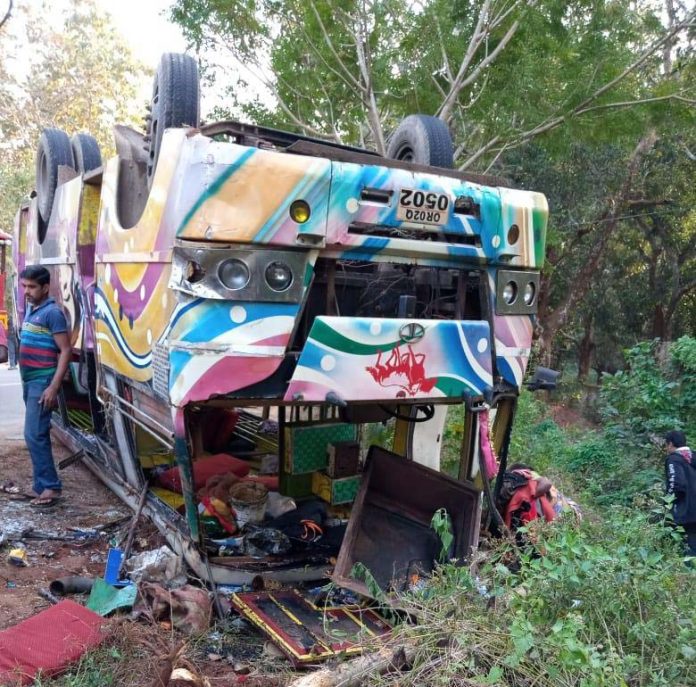 Nayagarh: At a time when the bus tragedy in Golanthara area of Ganjam district that claimed ten lives shocked the state Sunday, another road mishap on Khandapara-Nayagarh PWD road near Kainthapalli village under Khandapara police limits in Nayagarh district Sunday killed one and left 20 others, including ten children, injured.

A mini bus carrying 35 members of ten families of Sundarpur village under Chhatrapur police limits in Ganjam district was returning to the village. At Kainthapalli slope, on Khandapara-Nayagarh PWD road, the driver lost control of the wheels due to some unascertained reason before the bus skidded off the road.

The decreased has been identified as Ramchandra Rana alias Jhuna (45) of Sundarpur village. All the injured were first admitted to Khandapara community health centre (CHC) and later shifted to Nayagarh district headquarters hospital (DHH). However, all of them are said to be out of danger and will return to their village soon.

According to the villagers, they boarded the mini bus Sunday 2am and left for various tourist destinations in Nayagarh district. After visiting Raghunath temple of Odagaon, Ladubaba temple of Sharankul and Nilamadhaba of Kantilo, they were on the way to Buddhakhol of Buguda. Buddhakhol would have been their last destination and from there, they were to return home.

But the bus met an unfortunate accident before reaching Buddhakhol. Police detained driver Brundaban Sahu to ascertain the cause of the mishap.

Recounting the moments before the accident, Abhi Nahak (47), one of the injured, said he as well as some others heard a sound while the bus was going down the slope. And within a few seconds the bus skidded off the road and overturned. Ramchandra was standing near the cleaner so the bus trapped him, killing him on the spot. The deceased’s wife Mami was also travelling in the same bus.

“Thank God, we are escaped with bruises only,” Nahak said.