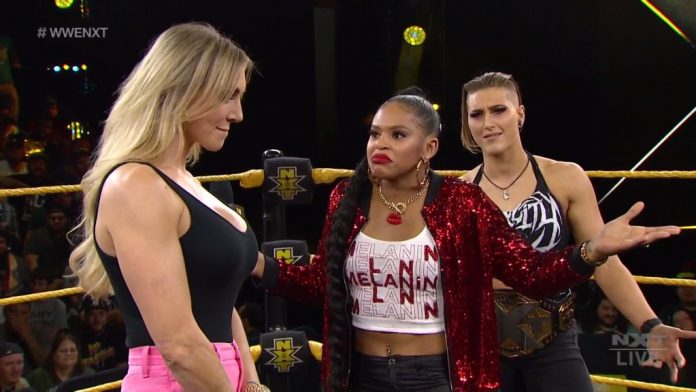 Here are your quick and dirty, editorial-free WWE NXT results for February 5, 2020. The show featured a six-man tag team main event, the Full Sail return of Charlotte flair, and more. Make sure you’re here tomorrow for the complete Best and Worst of NXT column.

– The show opened with the Broserweights coming to the ring in a Broserweights-themed golf cart with the Dusty Rhodes Tag Team Classic trophy and fireworks on the back. They were interrupted by Undisputed Era, and the teams exchanged words. Riddle got obsessed with the fact that Bobby Fish said the word “fish,” and launched in a song of, “How much fish could Bobby Fish fry if Bobby Fish could fry fish?”

1. Angel Garza defeated Isaiah ‘Swerve’ Scott. Zelina Vega wasn’t with Garza, despite becoming his manager on Raw. Garza pinned Scott with the Wing Clipper, then said he wants the Cruiserweight Championship back.

2. Dominik Dijakovic defeated Killian Dain with Feast Your Eyes. After the match, Dijakovic and Keith Lee had a staredown on the stage. Dijakovic will challenge Lee for the NXT North American Championship at TakeOver: Portland.

– Undisputed Era attacked KUSHIDA backstage. Bronson Reed stuck up for KUSHIDA, so they attacked him as well.

– Mauro Ranallo hosted a split-screen interview between NXT TakeOver: Portland opponents Finn Bálor and Johnny Gargano. Gargano made fun of Bálor for losing to Bobby Lashley 17 times in a row on Raw, and said he’d drive the NXT flag through Bálor’s heart. Bálor said he doesn’t have a heart, said that “Finn” is dead, and that Portland will be Gargano’s last match.

– Tommaso Ciampa attacked Undisputed Era backstage, causing a brawl between UE, Ciampa, and the Broserweights that found its way back to ringside. William Regal made a six-man tag team match between the teams for later in the night.

4. Cruiserweight Champion Jordan Devlin defeated Tyler Breeze with Devlinside. The numbers “2 5 20” flashed on the screen during the match.

– Bianca Belair tried to call out Rhea Ripley about Ripley challenging Charlotte Flair on Raw and overlooking her. Flair answered instead, followed by Ripley. Belair and Ripley decided to put their differences aside and beat up Flair, as they are NXT.

– The Undisputed Era, Tommaso Ciampa, Broserweights brawl found its way back to ringside, leading to the main event.

5. Tommaso Ciampa, Matt Riddle, and Pete Dunne defeated Adam Cole, Kyle O’Reilly, and Bobby Fish by disqualification when Roderick Strong interfered. After the match, UE beat down Ciampa and spray-painted a yellow “X” on his back. They were interrupted by the lights going out and a 2-5-20 graphic, leading to the return of the Velveteen Dream. Dream then took out UE by himself, and posed over Strong after revealing he’d had Strong’s family airbrushed onto his tights.