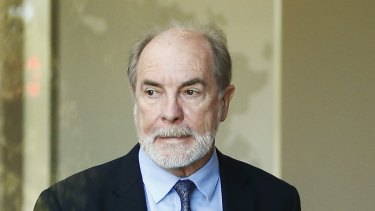 In doing so, Grant, the code’s inaugural chair and a former Kangaroo, broke a long silence.

He writes: “With the current crisis now upon the game, there are those within it who seek to lay blame and find scapegoats and, clearly, as Chair of the ARL Commission when the 2012 and the current (2018) funding agreements were put in place, I am a target. Specifically, I am accused of having ‘plastic balls’, ‘capitulating’ to the demands of the clubs and ‘saving my job’ by agreeing to club payments of 130 per cent of the salary cap and in doing so, leaving the game with no assets and no reserves that could get it through this crisis. This, categorically, is not the case.”

Grant describes Richardson’s “don’t do it, John” warning at NRL headquarters over acquiescing to the deal as “confusing”, pointing out: “He departed the NRL (as an executive) a year before the current funding agreement was struck, so he could not have been aware of the process that led to the 130 per cent agreement.”

But he does not dispute the Herald’s description of Richardson as “the ever polarising Richo”, saying of his year-long tenure as NRL Head of Game Development before returning to Souths, “I had really hoped he had the leadership, tenacity and patience to bring people on the journey with him.”

Grant insists that referencing the 2018 funding agreement as “the 130 per cent model” is “overly simplistic”, arguing it is “a bloody good deal for all parties and that, optimally executed, it would set the game up very solidly on all fronts for a very successful and sustainable future.”

The agreement, underpinned by a net 57 per cent increase in broadcast rights from the 2012 deal, resulted in the following allocation:

Grant justifies this on the basis only one club in 2016 (the Broncos) was profitable, saying, “An attempt was made to introduce differential funding that would allow those clubs with less opportunity to receive a greater share, but this was dismissed by the clubs, strangely even by the necessitous.”

But there was to be no more rescue funding from headquarters, forcing clubs to agree to a Club Sustainability Fund totalling $15m over the five-year term of the agreement.

A cap on football department spending, with penalties, was introduced to slow the arms race between clubs, a principal cause of their over-spending.

This was the lowest increase in funding to all stakeholders and refutes the claim of club bosses who say Rugby League Central is a bloated administration with millions wasted on consultants and overpaid executives.

Grant anticipated this upside, believing the game had been under-funded via corporate sponsorship. Yet when RL Central secured this increase, the clubs – already generously awarded a nine-times increase in grants – began fermenting rebellion, even before the coronavirus pandemic struck.

Grant says of the current funding agreement, now being ridiculed by Richardson, his colleagues and many in the media: “It was signed off by all members of the Commission – 16 club chairs, a number of whom are highly successful business people who are now engaged on a committee helping the game deal with COVID-19, eight independent commissioners, and two State chairs.

“Contrary to current reporting, I did not ‘capitulate’ nor did my fellow seven commissioners and nor the 16 club chairs. ‘Capitulate’ implies one side won and one side lost. None of us quite got what we were originally seeking but we got a result that we believed was in the interests of the whole game.”

In reference to the claim he did a deal to add another three years to his then six-year tenure, Grant said, “At no time was the future of my role as chair a factor in my thinking.”

A successful businessman, Grant finds it “offensive” that Richardson would need to say, “I’m sure he (Grant) never got any money out of what he did” (the so called 130pc agreement).

“It is not worthy of the Shane I thought I knew.”

Yet he finds perspective as this frightening pandemic causes even the richest sporting leagues around the world to shut down, with some likely to never return, saying, “As the AFL -the most mature and best capitalised of all national sporting organisations – has also found, no funding deal could ever have contemplated the magnitude of the fallout from the current crisis.”

And ultimately, he finds empathy and decency at a time these are diminishing qualities, saying, “For the sake of the game we all love and for those whose careers are vested in it, I wish all members of the ARL Commission the very best as they deal with this.”