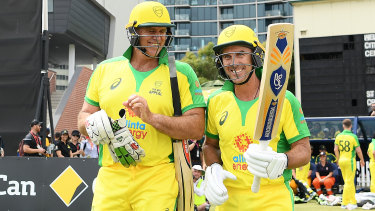 National men’s coach Justin Langer is emboldened by the wide race for Australian cricket’s highest honour, which he believes is a sign the side has developed the depth to conquer the world.

Starc was Australia’s best player in the World Cup, Langer said, and though he played just once in the Ashes was potent during the home Tests.

Cummins was arguably Australia’s most consistent player across all three formats though may be hurt by a lack of dominant matches.

“Often there’s a real standout but there’s a few after what’s been on this winter in the Ashes and World Cup and this summer,” Langer said after Cricket Australia’s bushfire appeal match which raised more than $7.7 million on Sunday.

“I’m not sure who’s going to win. I think it’s going to be tight this year, I reckon.”

Players are awarded votes on a three-two-one basis from teammates, umpires (home games), match referees (away games) and the media. Votes are weighted, with Tests given a value of six, one-day internationals three and Twenty20s two.

Langer declared he was feeling like “Superman” again after taking time out in January. The coach will be reunited with the national squad later this week when they fly to South Africa for ODI and Twenty20 series.

Though not on official duty, Langer kept a close watch on the Big Bash League and the national side during their ODI series in India which they lost 2-1.

Watching from afar, he said, had given him extra appreciation of the mental and physical demands players go through on the international circuit, especially the fast bowlers. Finding a break was crucial, he said.

There was a rare gap during the home international schedule for Australia’s stars to play in the BBL but while Smith, Nathan Lyon and Josh Hazlewood made themselves available Starc, Warner and Cummins opted to rest.

“I was sitting back thinking, ‘You poor buggers’. They had three games in seven days [in India], not only that, they had all the winter, all the summer,” Langer said.

“It’s interesting to watch from there. If you’re at the game, you’re thinking, ‘What are you doing’,
you almost feel like giving them a hug.

“Same with guys like Steve and Dave, there’s a lot of talk about how we want them all to play Big Bash cricket but gee it’s going to be hard to find that balance. Because I now know from first-hand experience how important it is to try and find some breaks. It has to be a break. As much mentally as physically. We’ll have to get that balance right.”