Home Internet Not only Kunal Kamra, But Also These 6 Indian Celebs created the... 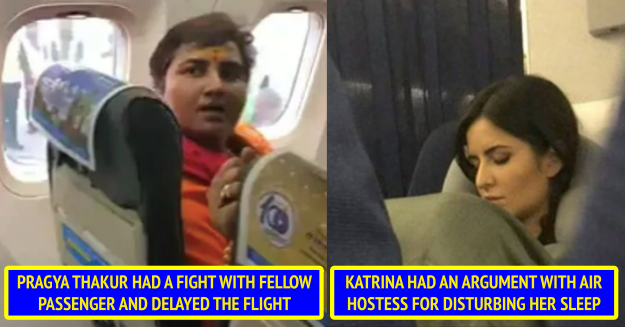 Kunal Kamra has been a cause célèbre lately for the reaction he elicited for heckling journalist Arnab Goswami onboard an IndiGo flight.

Kamra released a video on his social media handles heckling Republic TV editor Arnab Goswami. This led to his entry to the no-fly list from 4 major airlines- IndiGo, Spicejet, Air India and GoAir.
Kamra was banned after his in-flight encounter with Goswami.

But this isn’t the first time something like this happened. Some celebs are at times caught on the wrong side with their behaviour that drags them to headlines.

The actress reportedly got into an ugly spat with a fellow passenger while aboard a Dubai-bound flight after he accused her of endangering lives. She was allegedly speaking on her mobile phone while the plane was about to take off.

Allegedly, Priyanka used abusive language towards the passenger who was none other than Dr Fayaz Shawl, who asked the actress to get off her phone. PeeCee however denied the buzz and called him as an attention seeker.

On the other hand, the doctor reportedly claimed that Priyanka behaved in a high-handed manner and abused him.

Apparently, Katrina Kaif doesn’t talk to the crew while on board, even if she wants anything. She prefers giving orders to her assistant, who in turn asks the attendants to get whatever the lady wishes. Kat does this even when an attendant is standing right next to her.

During the promotions of one of her films, the actress was Travelling in a plane and when it was about to take off, the air hostess requested Katrina to straighten her seat and put on her seatbelt. But Katrina was fell asleep, so the air hostess woke her up and requested her to abide by the take-off rules.

Reportedly, Kat was livid at this and said, “How dare you touch me? Don’t you know who I am?” An embarrassed airhostess simply apologised and went away, with other co-passengers looking on and wondering what the commotion was all about.

Ranveer also made headlines for throwing tantrums on flight. This incident took place when Ranveer was travelling to Kolkata for the shooting of Gunday. While he was travelling in the plane, the air-hostess asked him if he wanted to have vegetarian or non-vegetarian food. Ranveer wasn’t sure what he wanted to eat and asked for some time to decide.

Later, when he asked for the non-vegetarian fare, the hostess apologised saying that it was over. Instead, she offered him vegetarian food. That is when Ranveer reportedly lost his cool and said that he would not even accept water from the flight’s staff.

Kangana is said to have her share of tantrums. According to reports, Kangana usually gives a tough time to those who attend to her needs during her flight. The actress usually travels with her assistant.

While she sits in first class, her assistant sits in economy class. The report stated that whenever it comes to eating in the plane, Kangana makes the airhostesses run back and forth and asks them to check with her assistant for every requirement of hers.

Shiv Sena MP, though not a celebrity, deserves to be in the list as he was banned by Air India and Federation of Indian Airlines for hitting Air India’s duty manager with his slipper 25 times when the latter urged him to deplane .

Gaikwad, carrying a business class ticket, insisted on taking the airline’s early morning flight from Pune to Delhi, which was an all-economy class. This led to an argument with the airline employees in Pune and an assault on the manager by the MP. The matter was later resolved and the ban was lifted.

BJP MP engaged in a squabble with flight attendants and delayed a flight. Last year, Pragya Thakur had irked fellow travellers who were onboard a SpiceJet flight, by refusing to vacate an emergency row seat, which is not allotted to passengers on wheelchairs.

The BJP leader was asked by the crew to move to a non-emergency row seat as she was in a wheelchair. Thakur had, however, refused and the flight was delayed by 45 minutes. No action was eventually taken against her.