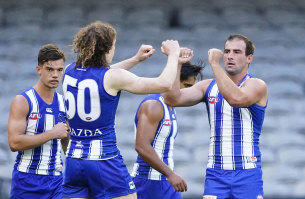 Many North supporters waited to see if this would develop into something more expansive throughout the year, and indeed into 2020 when he got the job full time.

Two goals by Ben Cunnington (right) were like gold for the Roos as they came from the clouds to edge St Kilda.Credit:AAP

A half into Sunday’s season opener, those watching would have thought there had been no real development in that style.

After trailing by 29 points at half time, North Melbourne came out with a new outlook in the second half, and it paved the way for an 8.8 (56) to 7.12 (54) win over the Saints, who were left to rue their inability to stem the tide.

North Melbourne – against a St Kilda side teeming with new, fast and hungry talent – were being cautious. They very rarely switched or changed angles with their kicking, instead going long down the line to a contest and trying to win the ball in a scrap and attack from there. It didn’t work.

North’s notable change of style resulted in a four goal to zero third quarter, cutting the deficit to four points at the final break.

They did that by getting the ball in the hands of players like Shaun Higgins, who set the tone in lowering his eyes and looking for shorter and looser options.

St Kilda dropped their bundle at the coal face, and it was Ben Cunnington who led the contested charge for North. Cunnington also turned into a forward line weapon, marking twice inside 50 in the final term for two goals, the second an impressive juggle close to goal when the Roos trailed by three points.

In the crowdless Marvel Stadium, Shaw stood like a soccer manager on the sidelines, imploring his players to take the right positions in their zone. The absence of crowd also gave rise to the voices of North players when their charge began.

Jy Simkin’s clean finish on the run in the third quarter was followed by unanswered goals from Aaron Hall, impressive youngster Curtis Taylor and Nick Larkey. All four goals were followed by celebrations that sounded purposefully over-the-top, so as to rev up the rest of the Kangaroos side.

As the Roos celebrated, St Kilda went into their shells.

The Saints hit the front in the final term through debutant Max King’s second goal, but Cunnington’s second major cancelled that lead. Rowan Marshall was paid a questionable mark with under two minutes to go in the final term, but missed the set shot to the right.

A Jamie Macmillan smother with under a minute left off a Paddy Ryder snap, from just outside the goalsquare, typified the North approach in the second half, the defender saving the game for his side.

North Melbourne took the four points despite struggling with injuries. Early in the third term they were down to one on the bench after Josh Walker, Jack Ziebell and Paul Ahern went down.

Tall defensive recruit Walker failed a concussion test in the first quarter after landing on his head in a marking contest, exacerbating North’s key defensive woes given Majak Daw had been ruled out pre-game with illness.

Meanwhile, North’s Jasper Pittard is likely to be cited by the match review officer after he tripped Dan Butler in the first quarter, the incident not warranting a free kick from the umpires.