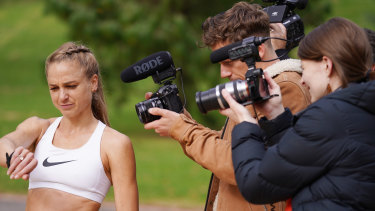 Genevieve Gregson was going to be on the plane for Tokyo until Tuesday morning. Flight cancelled she went out and broke the record for running The Tan.

It’s not Tokyo, but it’s something.

Gregson, the national middle distance and steeplechase champion, ran 11 minutes 54 seconds around the Botanic Gardens’ Tan track’s 3.827km. That was three seconds quicker than Sarah Jamieson ran it in 2006.

Genevieve Gregson shows off her time.Credit:AAP

Stewart McSweyn, the rising star runner who enjoying a breakthrough year in athletics and poised to make an assault on the world’s best in Tokyo, had planned to try to beat Craig Mottram’s men’s record time for the Tan of 10 minutes and eight seconds as in the physical shape to do it. After the likely postponement of Tokyo he wasn’t in the mental state to do it. He pulled out of running the race.

The news of Tokyo’s inevitable postponement, no matter how rational and inevitable, still hurt the athletes in different ways.

“For me I said to (coach Nic Bideau) I am ready to go I need to release my stress somehow let me do something and this was perfect,” Gregson said.

“For Stewy it might be like I am emotionally drained from this lead up, he was in such good shape, this might be his way to say I need to step away and reassess and look after my health.”

Champion marathon runner Sinead Diver, third on the Australian all time marathon list after her seventh place in the London marathon last year, joined Gregson attempted the record and finished in the fifth fastest time (12.14mins) across a distance that is far too short for her.

“I am happy with that it’s a big PB for me, this definitely not my distance – that hill (Anderson St hill) it set me back a bit,” said Diver who finished fifth in the 2019 New York marathon.

Gregson said the Tan record naturally didn’t compare to the Olympics but it did punctuate what has been an extraordinary year and will mean she salvages something out of a year where athletic competitions around the world shut down. 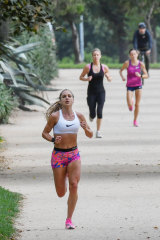 This week the athletes had been due to be in Sydney for the national championships and Olympics trials – they had been cancelled weeks ago.

“I just feel like a Victorian now. I am a Queenslander at heart but I have been training here for so long so it is nice to say ‘yeah I have my name on the board and it was worth it, that time. That’s going to be a thing that goes down in history, for decades later we will be telling our kids ‘2020 what a wild year it was meant to be an Olympic year, this is what happened’.”

“I can say that was the year I decided during Olympic trials that I’d go down to the Tan and I ran as hard as I could and I broke the record. So it is a bit of a fitting story there.”