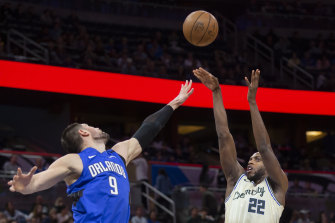 A slow start didn’t help Giannis Antetokounmpo’s shot at NBA history but the Milwaukee Bucks are hardly a one-man show.

Khris Middleton hit a three-pointer less than 20 seconds into the game and the team with the league’s best record never trailed on Sunday (AEDT) in a 112-95 victory over Orlando.

It’s the 13th time the Bucks have led from wire-to-wire this season as they improved their record to 45-7.

“A lot of people didn’t think we would have a better team [than last season], but I trusted my team from day one,” the league’s reigning MVP Antetokounmpo said.

“When we came together we knew what we had and it shows on the court.”

Antetokounmpo had 19 points, 18 rebounds and nine assists but fell short of becoming the first player in league history with at least 30 points, 15 rebounds and five assists in six consecutive games.

Centre Brook Lopez led the Bucks with 23 points, including a perfect five-from-five three-point attempts, while Khris Middleton had 21 points and 13 rebounds.

Nikola Vucevic led the Magic with 21 points and 14 rebounds and they hang on to eighth place in the eastern conference despite being swept 4-0 in their season series by the Bucks.

The Knicks led 91-89 when Randle scored inside to push the lead to four, although replays showed Detroit’s Australian centre Thon Maker appeared to take an arm to the face on the play, but it was not considered reviewable.

Maker, who has started the past two games since Detroit traded away Andre Drummond, began the game well with seven points in the opening 10 minutes but failed to add to that total.

Seth Curry scored 26 points in his return to Charlotte to guide Dallas to a 116-100 victory over the Hornets.

Australian Ryan Broekhoff chimed in with two-three pointers for six points in 16 minutes for the Mavs – who snapped a two-game slide despite being without stars Luka Doncic (right ankle sprain) and Kristaps Porzingis (rested a sore left knee).

The new-look Minnesota Timberwolves snapped a 13-game losing streak with a stunning 142-115 victory over the Los Angeles Clippers on the back of their highest points total of the season and a franchise-record 26 three-pointers.

Elsewhere, Toronto  gave up an 18-point lead before they closed out a franchise record extending 14th straight win 119-118 against the Nets and the short-handed New Orleans Pelicans beat Indiana 124-117.