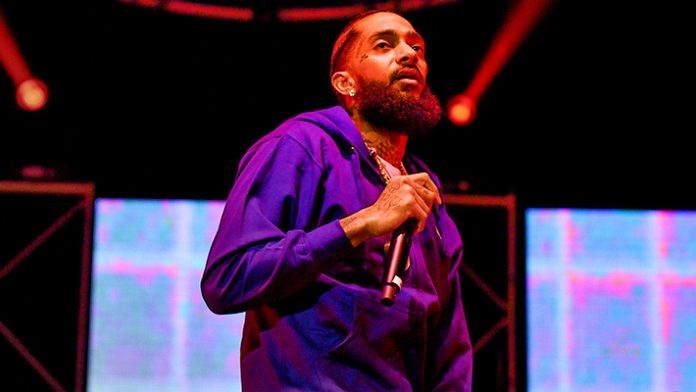 Although Nipsey Hussle‘s official motto was “the marathon continues,” his personal philosophy was probably best summed up by the title of the 7th track from his major-label debut album Victory Lap: “Hussle & Motivate.” While “the marathon continues” described the activation and execution of his “Hussle,” the fallen Los Angeles rap star always had greater goals in mind. He wanted to motivate. He wanted to motivate others to pursue their passions with the same drive that took him from selling merch on the corner of Crenshaw and Slauson to owning the strip mall across the street. Most importantly, he wanted that pursuit to be motivated by collective goals to strengthen, repair, and inspire communities.

Coming from the inner city Crenshaw neighborhood of South Central Los Angeles, it was important to Nip to be a light of guidance — to demonstrate the possibilities for someone from the hood to “make it out” and also to leave behind a map that others could follow for themselves. Moreover, Nipsey believed that by educating folks in the community and giving them the tools they’d need to succeed in a capitalistic system, they’d be motivated to do the same for others. That’s why, with the help of investor and business partner David Gross, Nipsey founded his Vector90 coworking space in 2018. The next move: Our Opportunity, a grassroots investment initiative with the goal of “spreading transformative economic opportunity in low-income neighborhoods throughout the United States.”

Our Opportunity is just one of the many important legacies that Nipsey Hussle left behind, but it may also be the one most emblematic of his beliefs and his work. He spoke early and often in interviews about the importance of financial literacy, independence, and what Gross calls “radical ownership.” His ideas weren’t necessarily new: This self-empowering credo was central to the philosophies of the books Nipsey read as he worked to acquire knowledge in the belief that knowledge would give him — and others — the power to change the circumstances that surrounded them. There’s a strong history of Black liberation movements such as the Black Panthers and the Nation Of Islam using collective action and ownership to effect positive change in the community.

The difference is in how Nipsey presented his ideas — not suited up with bow ties and bean pies, nor cartoonishly costumed in Afrocentric regalia and highfalutin “woke” terminology. Nipsey was from South Central and he looked it, talked like it, thought like it, and kept it at the center of everything he did. That’s what made Gross approach him with the idea for Vector90, from which initiatives like Our Opportunity grew. Gross grew up in LA and wanted to “start something in South Central that could educate and share and give experiences that people in the neighborhood might not naturally get.” To do so, he knew he’d need “someone who had a platform that the community respected and they loved and would listen to because they might not necessarily listen to it an investor or former banker coming back to the neighborhood and trying to share these things.”

That’s exactly what he got in Nipsey Hussle. The pair initially started out working to buy up the spaces in that Crenshaw strip plaza, opening the Marathon store in 2016 and expanding to the rest of the plaza’s spaces by 2018. But they didn’t stop there; ownership is one thing, but Nipsey and Gross wanted to teach others how to do what they did. While many rappers and “kids from the hood done good” often provide charity, for these two it was much more important to “do something that feels like a business,” according to Gross, but a business that would help others create their own businesses.

“The next phase for us was acquiring land, building housing, investing in other operating businesses, so it was all part of this connected idea,” Gross explains in a recent phone call. “That’s where Our Opportunity came up.” The program is described as an “opportunity umbrella” under which there are two main components: One is educational, teaching community members the basics of investment, while the other, the Own Our Own Fund, consists of more direct investment toward the community itself. The educational half will consist of a battery of classes, podcasts, and seminars provided both at Vector90 and online to explain the basics of the finances, the stock market, and real estate. Gross describes this program as having “open architecture,” with contributions from “universities, other non-profits, [and] financial services institutions” to ensure it’s as “robust” as possible.

With regard to the direct investment, the program has initiatives like an investor challenge, where Our Opportunity offers people who have never invested before $100 to open their first investment accounts. The idea is to encourage first-time investors to put funds into the S&P 500 and track their investments along with the classes in order to both learn to understand how the index works and to actually make money, which could theoretically be reinvested, building the overall financial health of the community. It isn’t hard to extrapolate from there; newly empowered investors could then expand their own networks, encouraging friends and family to join. As the average income of the community increased, so to would the quality of public services, opportunities to expand businesses and create generational wealth, and the possibility of breaking the cycle of decades of marginalization.

Traditionally, Black activists have shied away from encouraging such overt participation in capitalistic systems. Audre Lorde famously said, “For the master’s tools will never dismantle the master’s house. They may allow us to temporarily beat him at his own game, but they will never enable us to bring about genuine change.” Nipsey’s plan, however, doesn’t seem to be dismantling the system of oppression so much as absconding from its toxic effects altogether, a self-reliant ethos that echoed Marcus Garvey’s separatism. Nip would rather leave the master’s house, build a better, nicer house next door and invite his friends, family, and neighbors to share in the fruits of his labor, teaching them to build their own houses along the way. He was known as Neighborhood Nip because of his affiliations with the Rollin 60s Neighborhood Crips, but the nickname could just as easily apply to the focus of his work and his community-minded goals.

Such radical goals seem fated to meet resistance. When I ask Gross about how he pitched such concepts to investors without Nipsey’s far-sighted open-mindedness, he compared the pushback to the age-old conundrum of the chicken and the egg. “I actually knew people who had started successful co-working concepts,” he admits. “When I was conceptualizing it, everyone said, ‘Yeah, that’s not a business. It doesn’t make sense for you to do it.’ And they were like that, because it just doesn’t have the things that support and sustain it, and from a rational, logical standpoint, they’re right.”

“But in my world, it’s kind of a chicken and egg thing,” he continues. “There are six or seven elements you need to create an ecosystem of entrepreneurship and none of them were there and they only come once some of the other ones are in place and it’s chicken or egg. Someone asked to start something, someone has to do something first, right?” He says that while the people who would most benefit from this idea incubator would appreciate it and understand its benefits, for an outsider, that kind of faith is hard to come by. “Coming from or having family that comes from the and lives in a community like South Central, the Crenshaw district specifically, it means something different to us and that’s actually a benefit.” To that end, Vector90 often has to build services and resources
from scratch — over the past two years, Gross notes they’ve added a podcast studio and will be opening a juice bar/cafe in the next few weeks, with plans to add a health club next.

That’s why it was so important for Nipsey to create spaces like Vector90 and programs like Our Opportunity, but also it was why it was so crucial for him to do it in his neighborhood, and to be seen doing it. He would often say, “The highest human act is to inspire.” That’s what he wanted to do with his initiatives, to watch them ideas spread to other inner-city communities in Compton, in Chicago, in DC, in Atlanta, in Baltimore, and beyond. “It wasn’t just like some charitable idea is checking off a box for,” Gross says of Nipsey’s commitment to Vector90 and Our Opportunity. “I think it’s going to be something unique that at the scale that we’re doing it, the way we’re doing it, and the heart behind what we’re doing, it isn’t done.”

The On Our Own Fund and ones like it popping up in the wake of Nipsey’s death represent the fulfillment of one part of his dream. They are an opportunity to see economic growth and cultural change take place in the parts of cities that are all too often forgotten, overlooked, or outright fleeced by governments and powerful investors too far away from them to understand their challenges or care. If those communities are harrowed by violence and tragedy, it’s because they haven’t been given the same opportunities as their wealthier neighbors — or barred from them entirely. By transcending those limits, Nipsey Hussle proved what could be done, but by returning, he offered his neighborhood the chance to do what had been done. Hustle. Motivate. But the work isn’t done yet — it never really is. So, as Nip himself would say: “The marathon continues.”

For more information on the Our Opportunity initiative visit their website.