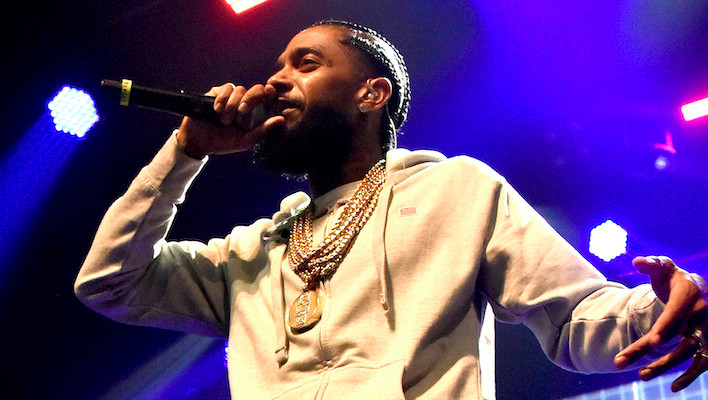 DJ Khaled, John Legend, Kirk Franklin, Meek Mill, Roddy Ricch, and YG joined forces on the Grammys stage backed by a choir in traditional Eritrean garb to pay tribute to the late, great Nipsey Hussle with a medley of his 2019 smash hits. For a time, it appeared YG would be unable to make the performance as he was recently arrested on suspicion of involvement in a robbery case. He did show up, however, sporting a crimson dye job in his hair to boot, to deliver an all-new verse on “Higher” rather than his customary “Last Time That I Checc’d” appearance.

All of the performers during the Nipsey Hussle tribute worked with Nipsey while he was alive save Kirk Franklin, leading to Grammy nominations for Best Rap/Sung Performance for DJ Khaled and John Legend, who collaborated with Nipsey on “Higher” from Khaled’s Father Of Asahd, and Best Rap Song and Best Rap Performance nods for Roddy Ricch, who appears on Nipsey’s own “Racks In The Middle,” his last single to chart before he died. Meek Mill was apparently working with Hussle on a joint album before he died. Meek’s verse was an original, addressed directly to Nipsey.

Nipsey himself was previously nominated for a Grammy for Best Rap Album for his “debut” album Victory Lap in 2019. Nipsey was murdered in front of his Marathon Clothing store in Los Angeles last spring, just as he was achieving the credit for which he’d worked for a decade, highlighted by his mantra that life is “a marathon, not a race” and that “the marathon continues.”

Check out the full list of Grammy winners here.