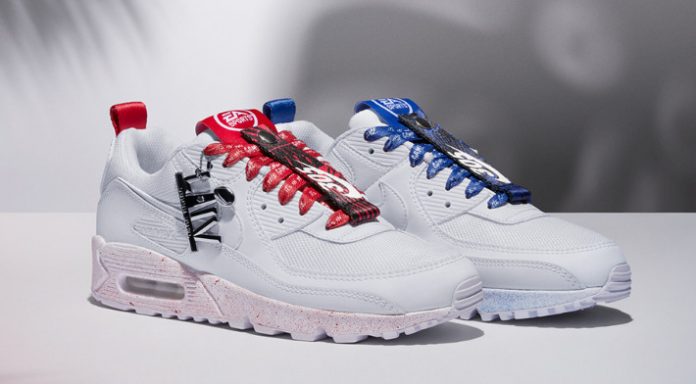 Super Bowl LIV will take place on Sunday evening in Miami, as the Kansas City Chiefs and the San Francisco 49ers will square off with the Lombardi Trophy on the line. In the advanced of the biggest football game of the year, Nike and Madden will join forces to drop a special pair of sneakers.

The two sides made a special pair of white Air Max 90s that feature the EA Sports logo on the tongues and the insoles, “it’s in the game” written on the laces, and a 305 strip on top of the laces, signifying the area code of Miami. Additionally, the shoes are mismatched — while they’re both on white silhouettes, one is red and one is blue.

The kicks will make their debut on Thursday evening at the EA Sports Bowl, while fans in South Beach could potentially get a pair through a raffle at Nike Miami starting on Friday, January 31st. This is not the only example of Nike and Madden doing something special for this year’s big game. It has already been announced that the two will release a pair of Vapor Edge Elite 360 cleats in Madden NFL 20, with athletes like Christian McCaffrey, Odell Beckham Jr., and Kyler Murray getting them.

As part of the release, the players who get these cleasts will see a boost in their speed and acceleration ratings in the game.