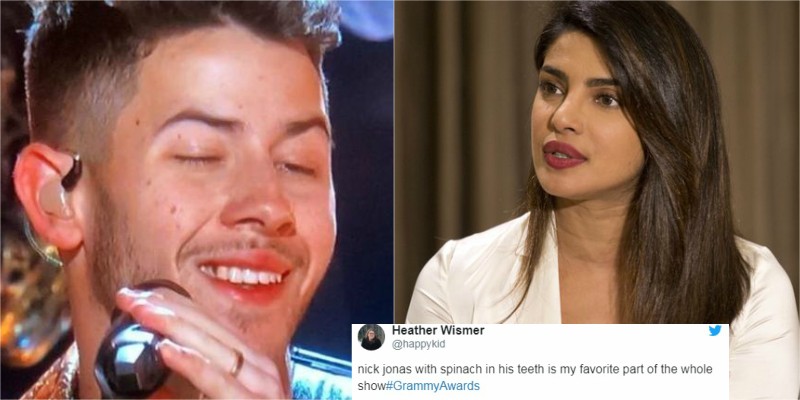 Bollywood actress Priyanka Chopra and Nick Jonas made heads turn with their stunning and glamorous appearance at the red carpet of 62nd Grammy Awards. Later at the event, Jonas Brother took over the stage and gave an enthralling performance and received massive applause from the audiences.

And what followed was a series of hilarious tweets and memes on the same. Twitterati are left in splits after spotting the piece of food stuck in his teeth and just can’t stop trolling the singer for the same.

Is it me or does Nick Jonas have food in his teeth? #GRAMMYs pic.twitter.com/E3NzliOR03

nick jonas with spinach in his teeth is my favorite part of the whole show#GrammyAwards pic.twitter.com/fPPlX1B5wP

Ummm is something in Nick Jonas’ teeth?! #GRAMMYs pic.twitter.com/4yk8bZ8qd9

Is Nick Jonas on the #GRAMMYs stage with spinach or something in his teeth?!? pic.twitter.com/BKWREj4U3l

Is Nick Jonas on the #GRAMMYs stage with spinach or something in his teeth?!? pic.twitter.com/BKWREj4U3l

However, Nick Jonas knows the art of giving it back to the trollers. He came up with a perfect and funny reply to the trolls. He wrote:

“And at least you all know I eat my greens,”

During their performance, Jonas Brother hinted at a new album and even performed a brand new song “Five More Minutes”.

Jonas Brothers were accompanied by their wives, Priyanka Chopra, Sophie Turner and Danielle Jonas at the ceremony. All three couples raised the temperature at the red carpet as they arrived together for the event and posed for the red carpet.

Here, check out some of the stunning pictures :