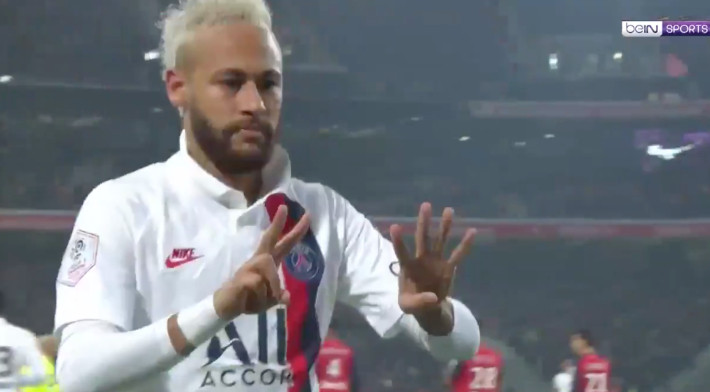 The sports world came to a screeching halt on Sunday afternoon as reports out of Los Angeles, which were eventually confirmed, indicated that Kobe Bryant died in a helicopter crash. Bryant was one of five people — including his 13-year-old daughter, Gianna — who passed away in the crash, which reportedly occurred on Sunday morning as the group was en route to a travel basketball game.

There are never enough words to sum up a tragedy of this magnitude, and over the course of the day, plenty of people have found ways to pay tribute to Bryant. This hasn’t just been in the world of basketball — on and off the hardwood, those who idolized Bryant have found little ways to honor the memory of the future Hall of Fame inductee.

One such person is PSG star Neymar, who bagged a pair of goals in the Parisians’ 2-0 win over Lille. His second came via the penalty spot, and after its conversion, the Brazilian walked over to a camera, put a “2” on one hand and “4” on the other, and pointed to the sky.

As one announcer pointed out, Neymar likely learned the news of Bryant’s passing in the locker room at the half. Bryant was, famously, a huge soccer fan, and according to Neymar’s various social media accounts, he was a huge fan of the Lakers star.

Having to do anything, let alone play a game, can be really, really hard after something like this occurs. But as we saw here and during the Raptors-Spurs game, there are plenty of ways to use the platform sports provides to pay tribute to those who pass away far too soon.