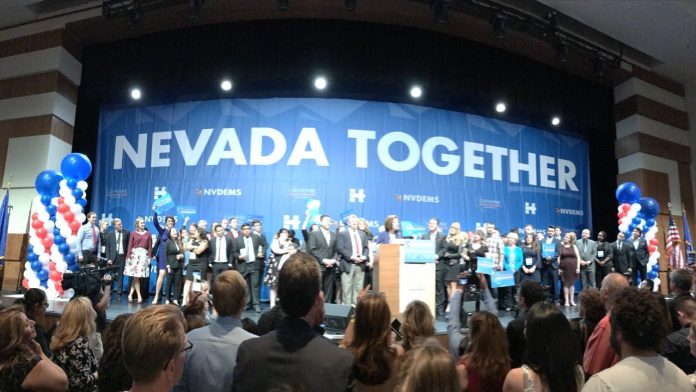 And whose to blame them? On Tuesday, Nevada Democrats abandoned ship on its plans to use a similar technology to that of Iowa for its early primary caucuses that take place in less than three weeks.

However, after witnessing the technological chaos the Iowa Democratic Party (IDP) suffered during its caucus from its poor decision to use its reporting app, Nevada ensures the same won’t happen on its watch.

“We will not be employing the same app or vendor used in the Iowa caucus,” Nevada State Democratic Party chair William McCurdy II said in his Tuesday statement.

“We had already developed a series of backups and redundant reporting systems, and are currently evaluating the best path forward.” Molly Forgey, a spokeswoman for the party, added that the party would not be using the original app developed by the original vendor, Shadow.

McCurdy II emphasized that the party “can confidently say that what happened in the Iowa caucus [Monday] night will not happen in Nevada.”

But its not just McCurdy II who stresses this notion. Former U.S. Sen. Harry Reid, who is credited with building Nevada’s Democratic Party, believes with “100% confiden[ce] that what happened in Iowa will not happen in Nevada.”

“I see this as an opportunity to learn. We’ve got time,” said Donna West, the current Clark County chair in Nevada, deferring further questions about the process to the state party.

But just for shits and gigs, what was the technology that Nevada Democrats would have utilized, but for the lack of foresight with the app’s development?

For one, they had announced plans to use two apps: one to tabulate results, as Iowa did, and a second app pre-loaded onto tablets for voters to use at caucus sites to cast online votes during four days of early voting.

But get this. According to the party’s spending reports filed with the Federal Election Commission, you know that big regulatory agency that enforces campaign financial laws with respect to U.S. federal elections?

The Nevada Democratic Party, according to the reports, paid Shadow Inc. $58,000 for technology services in August. Additionally, the party’s state-based fundraising reports also reflect payments totaling about $50,000 in October and December.

In Times of Crises, There Are Powerful Lessons to be Learned

Disasters aside, this is a huge discovery for future campaigns. Why?

We are finally witnessing what is supposed to be our country’s leaders, red and blue, recognizing the importance technology in 2020, and how it really can help improve everyday life. Just ask New Hampshire and South Carolina, which both choose to hold primaries instead of caucuses, and who deeply support what they believe to be “well-tested” systems.

That’s to be determined.

At the end of the day, Iowa’s tech mishap will hopefully force other states to get on-board if they want to stay relevant or on an even-level playing field for the future.

Interestingly enough, the party hasn’t ruled out the possibility of using another app to tabulate its results. But no other details regarding this have been released.

And unlike Iowa, Nevada is taking its time and due diligence:

“We developed a reporting application in order to streamline the caucus process and provide our volunteers with additional support to run their caucuses as efficiently as possible,” said Shelby Wiltz, the caucus director for the Nevada Democrata in a statement to The Associated Press.

“We’ve gone through several rounds of testing and continue to work with a team of security experts with varying backgrounds to ensure the integrity of our process.”

Where party officials in Iowa were not allowing precinct chairs to painstakingly download the new mobile app until just before the caucuses, Nevada has encouraged its precinct chairs to tear that app up for the past month, ultimately reducing what would be technological ineptitude on game day.