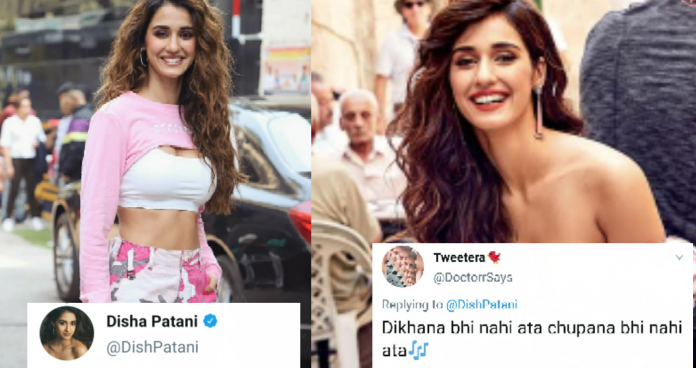 Sidhaant Patani was in the news recently for her big crush on her Bagghi 2 co-actor, Tiger Schroff and her failed attempts at impressing him.

Yesterday, she made the news with a new picture she uploaded on popular social media platform, Instagram as well as Twitter.

Disha shared a sort of behind the scenes video about the upcoming film on her social media handle.

While most of her fans responded well to the video, they were not very approving of her outfit choice.

It is important to note that Disha recently came out in support of actress Priyanka Chopra’s bold outfit at the Grammy’s for which PC was heavily trolled across all social platforms. This shows that Disha probably wouldn’t be bothered by these trolls trying to make fun of her but let us have a look at what some of her fans were saying.

One cannot avoid the sanskaari watchdogs especially if one is a girl. User @BlackBoka questions Disha about her sanskaar with a Johnny gif to which user @Raghu_Charan has a “funny” reply.