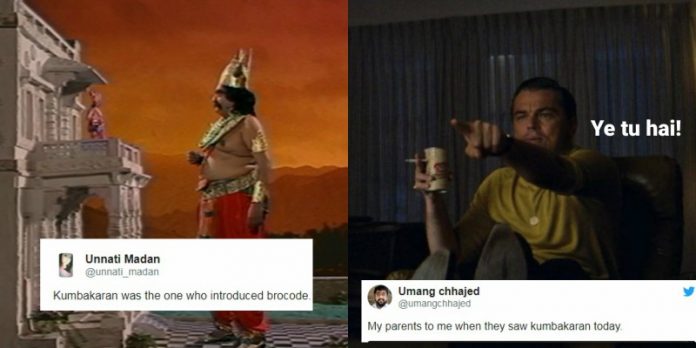 Ramayan, one of the two epics, has been loved by Indians all across for generations. The older generation has known the crux and excerpts in split stories from their elders or in books. The late 1980s took Ramayan on television and that proved to be a turning point in the entertainment industry. It glued the Indian audiences in front of their TV’s and literally digest each episode with emotion. The recent reruns of the old show of the epic have been a huge success after it aired during this current pandemic situation. While the 1990s generation is recalling their childhood, kids of today are learning about the epic in an interesting way. Some people even post their views on each episode or characters on a regular basis on their social networking sites.

Millennials have become a fan of this character as they think he was the most sorted in his life. With the re-telecast of the show, the Twitteratti takes the initiative to post about their love for the character in interesting ways.

Earlier parents and even now, call their kids Kumbhakaran if they are being lazy. It is because of the personality of the character who has an attraction towards peaceful slumber and laziness. During the lockdown, a lot of people have been getting bored and tired day in and day out. Funnily, they have started to relate to this character more than ever. Netizens have come up with various jokes and memes on the internet regarding how relatable his situation is in our daily lives.

Let us take a look:

My parents to me when they saw kumbakaran today. pic.twitter.com/dcTfhAHyk3

Wish I too get sleep like that ..forgetting all negativity around pic.twitter.com/KTdct8ZYyK

When Kumbhakaran would wake up in one of the episodes, a social media user pulled out an old address of Congress MP Rahul Gandhi where he talks about the ‘Kumbakaran lift yojana.’

Here is the video and the meme:

Jokes apart, some also think that Kumbhakaran did not receive the respect that he deserved as a character. he was known only for his affinity towards a scrumptious meal followed by hours of sleep. However, though one of the turning points of the serial, he is seen showing a true mirror to his brother, Ravan to get a reality check, even when he knew he was supposed to die. That is a saddening part right here where he was even more praised for his selflessness.

Kumbakaran has not been given his correct due in history especially in modern times. People remember him only for food and sleeping and forget how great he was. Only person who could show mirror to Ravan. Knew he was gonna die & went anyway for his brother. #Ramayan pic.twitter.com/SqU12sL55B

Many viewers empathized as well as felt bad for him. Despite him pointing out the bad deeds of his brother Ravan and how that will bring his downfall, he still keeps his support raised for his brother throughout his life.

Felt very bad for Kumbakaran. Gives all right advices to Ravan, tells how impo it is to do right work at right time. Reminds him of Ram being non other than Lord Vishnu & Sita being Lord Lakshmi & kidnapping her was a henious act.
But fights for his brother knowing he will die. pic.twitter.com/3MePQ7AS8D

One viewer called him “inspirational”. While another saw the brotherhood and unconditional love more powerful than that between Ram and Laxman. One viewer was even taken aback as to how he had a misconception about Kumbhakaran as being just a lazy character but he was proved wrong.

The most inspiring character from Ramayana is Kumbakaran.

Ramayan was aired as a rerun since March 28. It is aired twice every day at 9 am and 9 pm. As reports say, at present, it is one of the highest-earning shows since March 2015.

Which one is your favorite Ramayan character and why?

Leave in your comments!