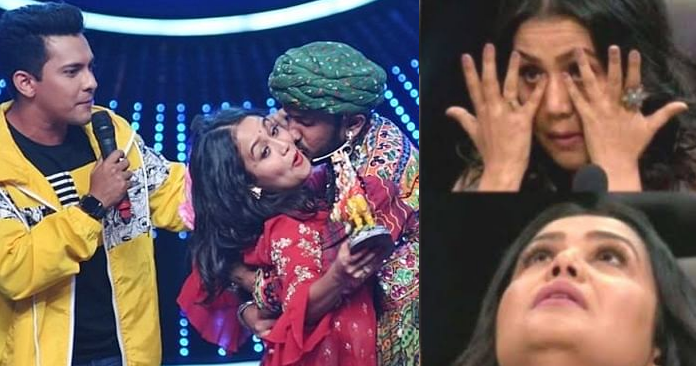 Hey Readers, Welcome back to Desi Humor. Neha Kakkar is the voice artist heard in almost every song today. She has gained all her stardom in very little time coverage. She is seen as one among the Indian Idol’s Judge team.

Neha Kakkar is a sensitive warrior. Where on one end she is seen crying on all emotional moments, he has strongly battled her break-up phase and depression stages.

Apart from all her successes, Neha has some controversies and tales which aren’t given considerable media coverage. Scroll down and look at all such stuff unveiled here.

On the sets of a very popular reality show, Neha was kissed forcibly. It was a fan and a contestant who did this to Neha on National Television even without her consent. This act of love seems rude though. Neha is a really kind person to keep this away from unnecessary attention.

Neha was being trolled for being a crybaby. This was indeed making fun of her emotions. She is quite much seen shedding tears on the sets of Indian Idol. This time it was a contestant who was a child of her fellow teacher. Neha addressed him as Guru and also narrated how he stood beside her during all her tough times. This time her emotions were seen more like a meme template.

Neha was dating Himansh Kohli from the time when both of them were infamous. But due to reasons, they had certain differences which lead to a harsh end between them. Neha had to go through this emotional trauma. It was extremely difficult for her to manage her routines all that while. Yet, she never gave up on herself and came up with wings. Her success is a tribute to her emotional strength.

A well-known comedian Gaurav Gera took up Neha as a topic for his next video gig. He made a short video, mocking on her with the purpose to entertain his viewers. Neha didn’t appreciate the act. Instead of being a silent victim, she chose Instagram as her tool and shared a post as a rejoinder. That was a good step taken from her side which seemed to be a suttle warning to all such acts.

Neha dived into the good media controversy phase when she received the Instagram award. She has approximately 32.2million followers on the platform. Neha is the first musician to be honored by this award. Only four celebrities have been lucky enough to receive the award before her.

Neha didn’t belong to a well to do family initially. Her father used to sell snacks near her school gate. She and her siblings were mocked by other mates. Neha shared this thing in a reality show and chocked on tears while speaking. All her talent and hard work have paid off quite well. Her story is an absolute inspiration to those who prejudice and demotivate themselves to lack of monetary resources.