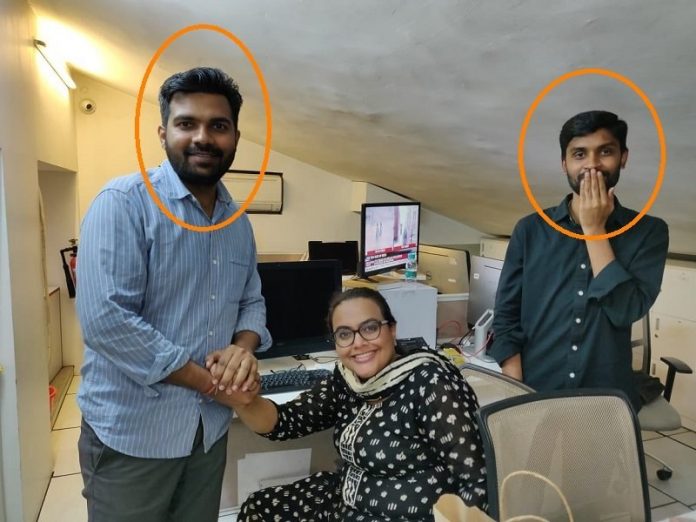 NDTV claimed that Arvind Gunasekar, who has a complicated relationship with facts, was circled by a mob that hit him on the face. A lathi was about to be brought down on his head when his colleague, Saurabh Shukla, intervened. The report further claimed that the lathi hit Saurabh instead and he was also punched on the back and the stomach and hit on his leg.

Interestingly, new images posted by one of the ‘journalists’ who claimed he was punched on the back and hit on his leg, shows that neither of the reporters has any signs of injuries.

Soon, netizens took to Twitter to question about the lack of apparent injuries on the three.

Hey @nidhi they were almost killed you said. https://t.co/6yr70yu9G5

Didn’t @Nidhi claim that these guys were “badly beaten up” by Hindu mob? Do they look beaten up? https://t.co/82iZnGLugG

@Nidhi Your lies are exposed by your colleague….What a shame! You should be booked for spreading rumours.
@DelhiPolice https://t.co/KvFwEtzeU2

In the anti-CAA riots that broke out in the national capital on 24th February, as many as 20 people have lost their lives. One 19-year-old Vivek was attacked by rioters in his own shop and a drill machine was bored into his head. On Monday, another Hindu activist named Vinod was killed by the Muslim mobs in the city during the anti-CAA riots. The body of a Hindu activist was seen being dragged to the far end of a street in Brahmapuri even as the violent Muslim mob passionately shouted slogans of “Nara e Taqbeer, Allahu Akbar”. A bike parked nearby is also seen being torched by the anti-CAA rioters.