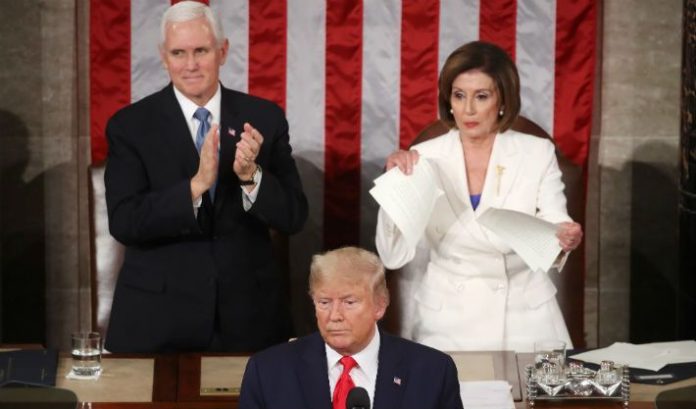 Tuesday was another normal weekday in the now-ordinary political drama that is the United States these days. Donald Trump’s impeachment trial in the Senate continued, and the news was dominated by chaos in the Iowa caucuses because of a long delay in the release of results for Democratic presidential candidates.

Once all of that was over, there was even a State of the Union address on which to focus. Donald Trump’s third address to both chambers of Congress had some notable Democrats missing from the proceedings, but Nancy Pelosi was front and center for Trump’s bombastic speech. Last year’s event drew some viral buzz from what’s best described as sarcastic clapping, but the non-verbal battle between Trump and Pelosi took center stage once again on Tuesday night.

It started before the speech began, in which Trump seemed to snub Pelosi by not shaking her hand before his speech.

The moment happened when Trump handed her a copy of the speech. Pelosi extended her hand to Trump, who either didn’t see it or simply ignored it. It was something Pelosi made sure to tweet about later.

That had plenty of people talking through a speech that was thoroughly fact-checked in real time by journalists and those following along on social media alike. Including Pelosi herself, who had her Twitter account send out real-time rebukes of what was being said by Trump.

But the final (non)word came from Pelosi, who at the conclusion of Trump’s address systematically tore up the speech page by page.

Pelosi explained herself in a video that quickly went viral in its own right.

Speaker Nancy Pelosi on why she ripped up President Trump’s speech: “Because it was the courteous thing to do considering the alternatives.” pic.twitter.com/nYTjAZAwGo

And there were plenty of reactions to the moment, much like her clapping that was instantly GIF’d a year earlier. While many on the right criticized her ripping up the speech for disrespecting important moments included in it, many pointed out that doing so changed the narrative of the evening in a very unique way.

Seems to me like Pelosi took a page out of Trump’s playbook and stole the spotlight away. No one’s talking about the speech now.

I just saw someone say something online that really resonated with me: that with a flick of her wrist Pelosi may well have—in the view of history—overshadowed Trump’s whole speech. There’s a sense in which there’s huge power and courage in that—how an act of resistance resonates.

It wasn’t a night where either politician escaped criticism, but it was certainly more entertaining than watching hours of cable news on Monday night where networks scrambled to fill air time despite having zero reports of results from Iowa. It may not change much about the current state of things or ease tensions in the political climate, but it definitely made for better TV.