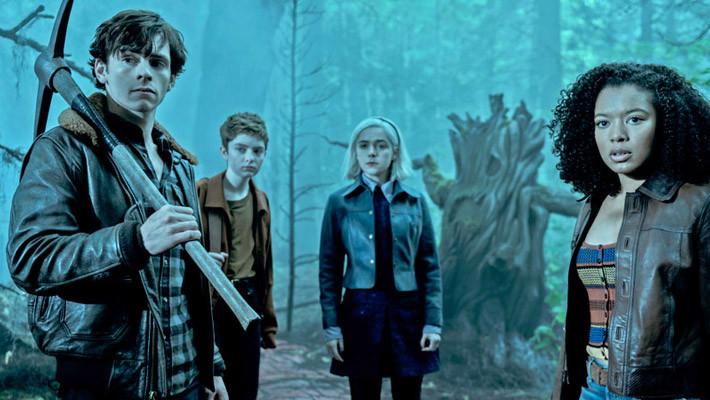 Chilling Adventures of Sabrina: Part 3 (Netflix series, Friday) — The third time (remains a) Hellish charm for Kiernan Shipka’s teenage witch, who’s on a mission to rescue her warlock boyfriend, Nicholas Scratch (Gavin Leatherwood), from the grips of Madame Satan in Hell. In the process, she must convince The Fright Club to join the efforts while also contending with Prince of Hell Caliban. Oh, and Greendale’s also under threat from pagans, so yes, all Hell has broken loose.

Shrill: Season 2 (Hulu series, Friday) — Aidy Bryant stars in the sophomore round of adapting Lindy West’s best-selling memoir. This season, there’s a new life path (and romance) for Annie after she comes down from the high of confronting her troll.

The Ranch: Season 8 (Netflix series, Friday) — The long-running, popular (and still Danny Masterson-less) show starring Ashton Kutcher, Sam Elliot, Elisha Cuthbert, and Dax Shepard returns for one final turn in the saddle. The very future of Iron River Ranch is now in question, so settle in with a glass of your favorite whiskey.

the goop lab with Gwyneth Paltrow (Netflix series, Friday) — Borne from Gwyneth Paltrow’s lifestyle website, the series promoted itself with a vagina-like poster, so it will surely continue pushing the boundaries of “wellness.”

Charmed (Friday, CW 8:00 p.m.) — The curse is alive and well from Jordan, so good luck, Maggie and Mel. Also, an unspoken feeling lands on top of Macy and Harry. Oof.

Dynasty (Friday, CW 9:00 p.m.) — A mission to find Kirby is afoot for not-quite-avengers Sam, Colby, Culhane, and Adam. Meanwhile, Alexis and Cristal are getting historically explosive.

Batwoman (Sunday, CW 8:00 p.m.) — Demons from the past haunt Kate and Alice while an unanticipated guest touches down in Gotham.

Doctor Who (Sunday, BBC 8:00 p.m.) — There are trigger-happy space police running amuck in 21st-century Gloucester. The Doctor and her crew must speed back to Earth to intervene in the cathedral city.

Supergirl (Sunday, CW 9:00 p.m.) — Supergirl must contend with a Toyman copycat while Winn Schlott is back from the future.

The Outsider (Sunday, HBO 9:00 p.m.) — Holly Gibney continues to retrace Terry Maitland’s footsteps and finds an eerily similar case for comparison’s sake, and poor Glory is dealing with a wealth of opposition.

Avenue 5 (Sunday, HBO 10:00 p.m.) — Ray and the team touch base with NASA on a rescue mission, and an engineer reveals his surprisingly positive theory about where the ship goes from here.

Curb Your Enthusiasm (Sunday, HBO 10:30 p.m.) — Larry surprises Susie with a lavish birthday present, and he’s working on a revenge scheme upon Mocha Joe while consulting his attorney on another matter.