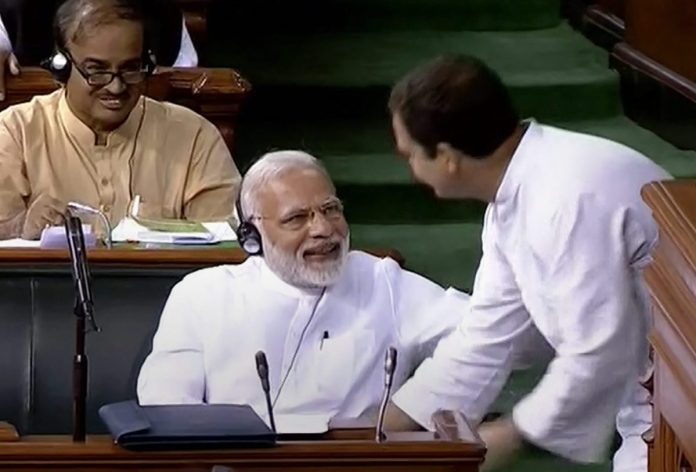 Congress leader Rahul Gandhi Tuesday attacked the Bharatiya Janata Party and Aam Aadmi Party over rising unemployment in the country as he hit out at Prime Minister Narendra Modi for not speaking a word about it.

While addressing a rally in Jungpura in south Delhi, both the Prime Minister and Delhi’s chief minister Arvind Kejriwal cannot resolve the biggest issue facing the country even though several countries are ready to invest in India.

He asked whether Prime Minister Narendra Modi fulfilled his promise of providing jobs to two crore youth of the country.

“Do you remember that promise? Have they got those jobs? What has the AAP and Arvind Kejriwal do in Delhi to alleviate unemployment?” he asked. The Congress leader then went on to ask who brought in demonetisation and Goods and Service Tax and whether it helped the people.

This is the first time the Congress leader is canvassing for his party for the February 8 Delhi assembly elections.

Prime Minister Modi gave a good slogan of Made in India but did not put up one factory in the country, he alleged.

“They are selling everything – Indian Oil, Air India, Hindustan Petroleum, railways and even Red Fort. They may even sell the Taj Mahal,” he added.

“If Made in India is implemented, two crore youth of the country will get jobs every year. But Narendra Modiji and Arvind Kejriwal are not interested in that. All they want to do is to make people fight against each other and grab power,” he said.

Rahul Gandhi said most of the countries, like the US, Japan, Australia, England and Italy, sent their companies to China but are worried that it is not going to help them anymore.

“But they are now looking at India. They are looking at the youth of India and have one question for them? Can you stand up to China? Can you do Make in India?” The whole world is asking,” he said.

Every country in the world, except China, wants to invest in India but all they see is hatred, violence, rapes and murders in the country since the last five years. “This is not our history. This is a country of love,” he said.

They talk of Hinduism, Islam, Sikhism, they don’t understand these religions. “None of the religious texts say kill the other person or oppress them. What kind of Hindu dharma Narendra Modiji follows?” he asked at the rally organised in favour of the Congress candidate from Jangpura, Tarwinder Singh Marwah.

Hinduism is about love and connection with other people, he added. “All the BJP and AAP want to do is spread hate in society. The Congress party just can’t do it.”

Rahul Gandhi continued his attack on Union finance minister Nirmala Sitharaman over her hollow budget speech and said the announcements made by her will benefit just a handful people in the country.

“In an interview, finance minister Nirmala Sitharaman was asked how many jobs were created? She said, ‘If I give you any number, Rahul Gandhi would go after me and say that I am lying’. She is not ready to speak about job creation,” Gandhi taunted.

The finance minister is not ready to talk about the jobs created in the country, he said as he pointed to her “hollow speech” and continued that the announcements will benefit only 15 people.

“I am been thinking that I will make a list of the projects given to Adani by Modiji. It will take at least 45 minutes to just read the names of those projects….” he said.

“Adani and Ambani, remember these two names. The government is run by them and not by Prime Minister Modi. And they are the only beneficiaries,” he said.

The Congress party could not win a single seat on the last assembly elections held in 2014. It is looking to better its performance in an election, which is being seen as a two-way race between the AAP and BJP.

The Kejriwal-led party had swept the 2015 Delhi assembly polls with 67 of the 70 seats and the BJP managed to win three.