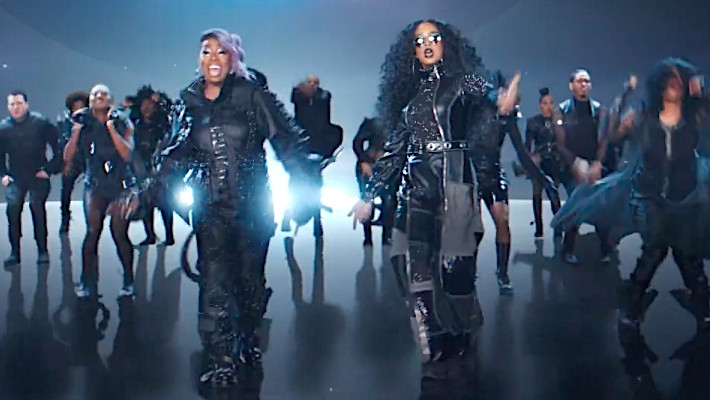 Missy Elliott and HER reimagine a rock classic as a hip-hop anthem in a new Super Bowl commercial for Pepsi’s own Zero Sugar remix of its signature beverage. In the ad, the two stars remix the Rolling Stones’ 1966 hit “Paint It Black” with a new verse by and beat produced by her longtime collaborator Timbaland. The video opens with HER standing in a crimson field surrounded by identically-dressed extras in uniform lines holding a suspiciously familiar red can of generic cola, before her can dissolves into a can of Pepsi’ new flavor, and she smashes through a wall to a new, all-black landscape.

Surrounded by Missy, a squad of dancers dressed in black leather, and lit by what appears to be a moon covered in the Pepsi logo, HER joins the dance party before the two performers do the usual conspicuous product placement sipping shot to close out the 30-second clip. Presumably, the version that will air during the Super Bowl will be longer, establishing HER’s existence in the red world as boring and uniform, while Missy’s clipped verse may just get a chance to shine in full. That’s how it usually works when she does commercials for snack brands — many of which aired during previous Super Bowls. Meanwhile, the high-profile placement may be just what HER needs to make the jump from the R&B charts to the Hot 100, with a little more name and face recognition from an audience that may not be checking for hip-hop-influenced soul singers.