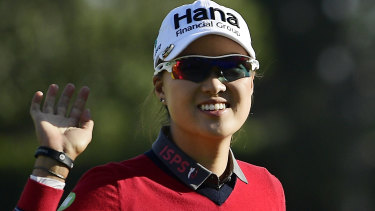 Lee carries heavy expectations into the tournament at Royal Adelaide of becoming the first Australian since Karrie Webb in 2014 to capture the title.

In years past, Lee felt that burden – but not this time.

“To be honest, I feel pretty relaxed this week for some reason,” Lee told reporters on Tuesday.

“Usually I have a little bit of pressure to put on myself to perform.

“I think it’s as big as a major championship because it’s our home open.

“It would just be a great honour to be crowned the champion of the Australian Open as an Australian.

“But last week I had a pretty solid week and hopefully I can get some of that form into this week too.”

“He had a nice celebration, I think he was drinking out of his trophy,” Lee said.

But Lee’s focus quickly switched to the Open and potentially joining Webb, Jan Stephenson and Jane Crafter as local winners of their national championship.

Lee climbed to world No.2 midway through last year after notching her fifth LPGA Tour win – she was a tournament runner-up four times amid eight top-10 finishes.

The 23-year-old ended the year ranked ninth but, along with compatriot Hannah Green, who won her first major last year, are Australia’s leading contenders at Royal Adelaide.

The Australians, however, will meet hot competition in a field boasting 15 major champions.

American Nelly Korda will defend her title and forecasts a rugged battle, depending on when the winds blow on the course in western Adelaide.

Korda played Royal Adelaide on Monday in calm conditions and described the course as “a golfer’s dream”.

But she’s not so sure of that appraisal after another practice round on a windy Tuesday.