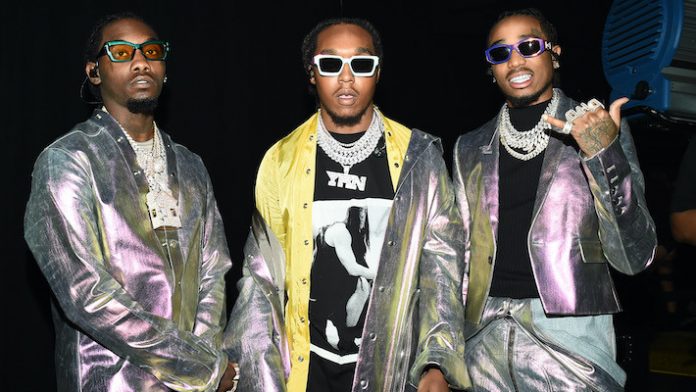 Originally expected in 2019, Migos‘ upcoming fourth album, Culture III has hit a number of stalling points since its predecessor arrived in 2018. To numb the wait, the trio set out on their individual paths with solo albums that each member released between late 2018 and early 2019. Back to their group ways, Migos return with a new single to hopefully begin the Culture III campaign.

With Young Thug and Travis Scott serving as guest acts on the new single, Migos share their new nonchalant anthem in “GNF,” an acronym for “Give No Fxk.” Despite the track just arriving, fans were well-aware of the song’s existence after all artists took the stage at Travis Scott’s Astroworld Festival to perform the unreleased track for fans. The track also adds to a long list of collaborations between the artists as they have all worked with one another several times in their careers.

Attached with a new visual, the five artists find themselves in an almost-barren warehouse as they begin to fire their verses away. Thanks to visual effects from the video, Migos, Scott, and Thug have their bodies distorted, multiplied, and transported on command. As for the featured acts, “GNF” comes just a couple of months after Travis Scott unveiled the debut compilation project with artists signed to his JACKBOYS imprint. It was also two months ago that Young Thug updated his So Much Fun album with four new songs, one of them which featured Travis Scott.

To listen to “Give No Fxk,” press play on the video above.