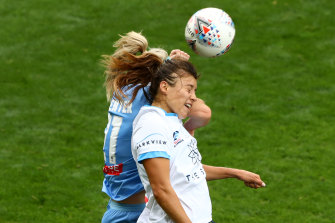 Melbourne City has ended their memorable season in perfect style, winning the behind-closed-doors W-League grand final 1-0 against reigning premiers Sydney FC in a game that will surely be recalled as the most unusual title decider.

A first-half goal to player of the match Steph Catley after a blunder by Sydney goalkeeper Aubrey Bledsoe was all that separated the teams.

Bledsoe made amends with several subsequent good saves while City had numerous opportunities to stretch their advantage but could not take them.

In the end the championship went to the right club given City’s season-long dominance.

Rado Vidosic’s team won 11 of their 12 W-League games, drawing one, conceded only four regular season goals and won their semi-final 5-1.

But a tough, committed and skilful Sydney made this a much tougher finale than most pundits predicted.

Maybe it was the occasion, maybe it was the fact that they were all too aware of the history making potential before them, but City’s defence, so solid all season, seemed uncharacteristically nervous in the opening half.

Sydney, who had lost 2-1 at home to City when they met for the only other time this season, had pledged to go into this game playing 11 women, not their reputation, and Ante Juric’s side were as good as their word as they began in lively fashion.

Veronica Latsko got round Rebekah Stott in just the second minute before firing wide as the visitors looked to make their presence felt early.

It was Sydney who had the first real shot on goal in the eighth minute when Remy Siemsen tested Lydia Williams from distance, but the Matildas keeper held the ball comfortably.

But games, even big ones like this, can change on a turn of fortune, and City got their noses in front against the run of play in the 15th minute through captain Catley.

The Matildas left-back played a one-two with her national team counterpart Emily van Egmond before firing in a shot from the left side of the penalty area.

It should have been a routine save for Bledsoe, but the American shot stopper somehow failed to grasp the ball and could only watch as it bounced off her body and went into the net.

That was the catalyst City needed, and they began to get on top for the next 20 minutes with Catley and van Egmond to the fore. 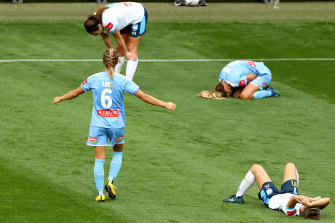 Bledsoe partially redeemed herself in the 27th minute when, after a neat build-up, City defender Lauren Barnes fed a pass to van Egmond, whose low drive was headed for the corner before Bledsoe got down to save.

City should have doubled their advantage in the 31st minute thanks to another Sydney blunder, this time by Matildas defender Alanna Kennedy. The centre-back under hit a pass back to Bledsoe, presenting City’s Scottish striker Claire Emslie with a free shot with just the goalkeeper to beat.

But this time Bledsoe pulled off an excellent save to keep her team in the game, paying recompense for the error that gave the hosts the lead.

Kyah Simon then hit the woodwork as City pressed for a second but with 10 minutes of the half remaining Sydney began to come back into the game, with some shouts for a penalty when a cross appeared to hit Catley in the face. Replays suggested it came off her elbow.

Williams then had to make a save two minutes from the interval, diving to stop a Huerta drive after Barnes’ clearance fell to the opposition. 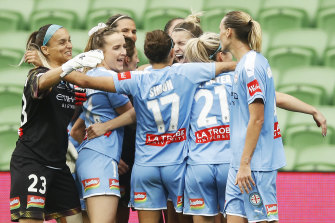 Melbourne City played and won the grand final to an empty stadium due to coronavrius lockdown measures. Credit:Getty Images

Sydney had an excellent chance to level four minutes after the restart when an Ally Green long ball found Latsko with just Williams to beat. The Matildas number one made herself big and parried Latsko’s shot, which looped up and was headed for goal before Ellie Carpenter got back to hook the ball to safety.

Simon had the opportunity to ease City’s nerves in the 57th minute when she was played through by Emslie but with just Bledsoe to beat she drove just wide.

Carpenter’s rampaging run in the 65th minute gave her a shooting chance but she too could not hit the target, then Bledsoe dived well to keep out van Egmond’s 71st minute shot on the turn.

Williams was alert when she needed to be, diving well to deny Sydney substitute Princess Ibini’s shot 10 minutes from time as Sydney drove forward in search of an elusive leveller and City held on with the resilience they have shown all season.