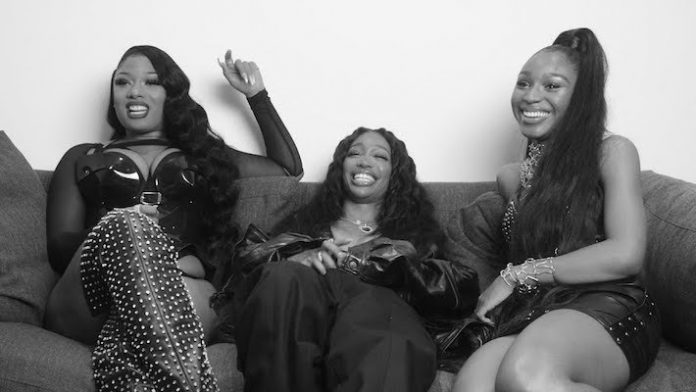 Honoring women in the entertainment industry with their second annual Women Shaping The Future issue, Rolling Stone unveiled the cover for their upcoming March issue earlier this week. The cover flaunted three of music’s most powerful women: Megan Thee Stallion, SZA, and Normani. On top of the three women appearing on its cover, Regina King, Stacey Abrams, Natasha Lyonne, and “other prominent women in entertainment, sports, politics, and culture” were promised to appear within the magazine issue, which is slated to land on shelves March 3.

With a week left until the issue’s arrival, Rolling Stone shared an on-camera interview with Megan, SZA, and Normani that finds them opening up about their overall experiences in the music industry as apart of the magazine’s First Time video series.

Starting on a high note, each artist shared their individual “I made it” moment. Megan led the way saying, “The first time I feel like I ever made it was when my grandma saw me on TV… Now I got to come to the house. Now everybody’s at the house like, ‘We saw you on TV.’” Normani’s own moment also featured her grandmother after she attended a concert Normani had in her Houston hometown. Lastly, SZA shared a different perspective on “making it,” one that came after her grandmother saw her on TV.

“This is the precipice of our careers, of our life stories, of our journeys, so we’re making it currently, and every day it’s, like, growing exponentially,” she said. “We’re just curating our lives.”

Next, the ladies shared the struggles they’ve faced in the industry and their fight to overcome them.

“I feel like the first time is when we step into the door period as a diaspora as a gender,” SZA said. “It’s kind of coming in and not being pigeonholed into one space.”

Adding to her thoughts, Normani continued saying, “They try to push [a] perception on you. To put that cap on me [means to] restrict me from the fullest of my capacity. Not being able to explore that just doesn’t seem fair.”

Megan discussed realizing that her music was more than just for her immediate fans.