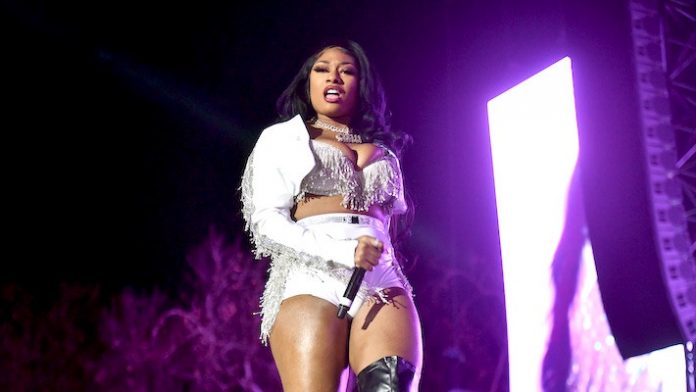 Megan Thee Stallion fans were in for the surprise of a lifetime yesterday when video evidence suggested that the rapper may be in an unexpected relationship. G-Eazy posted a clip of him and Megan getting closer than platonic friends generally tend to, cuddling as G-Eazy kissed her neck and otherwise got cozy.

Naturally, speculation ran wild about whether or not the two are in a relationship. Those flames were only fanned when G-Eazy posted a photo of Megan and captioned it with heart emojis. This morning, though, Megan decided to put the rumors to rest, as she took to Twitter to clarify what’s going on.

She tweeted, “Lol alright nowww y’all got all y’all jokes out but I am not f*cking G Eazy.” After somebody asked, “so why was he sucking the makeup off ur right cheek like that hottie,” Megan responded, “He like fenty,” followed by a shrugging emoji.

Lol alright nowww y’all got all y’all jokes out ???? but I am not fucking G Eazy.

Aside from snuggling up together, Megan and G-Eazy have kept busy lately. Megan recently got pranked on a new episode of the Punk’d revival, which is being hosted by Chance The Rapper for the forthcoming streaming service Quibi. Meanwhile, towards the end of 2019, G-Eazy dropped a heist-themed “I Wanna Rock” video with Gunna.