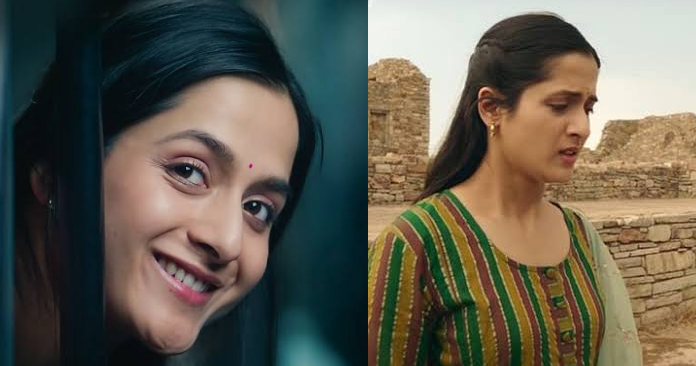 Love Aaj Kal’s trailer released a few days back and is receiving mixed responses from the audience. In the trailer, Kartik Aaryan romances two divas, Sara Ali Khan and Arushi Sharma. While we know much about Kartik and Sara, many people are not aware of Aarushi, who is making her debut as a lead actress in this film. Read on for some fantastic details about Aarushi.

When I saw her first in the trailer, I felt like I have seen her somewhere before this trailer. When I researched about her like most of you did, I found that she has worked with Imtiaz in a popular film earlier.

While she is making her debut as lead actress, Aarushi is not new to facing the camera; in fact, she has previously worked in Imtiaz’s Tamasha as young Ranbir’s teacher Samyukta.

She Started
Acting As A Student

Arushi was a student at Jai Prakash University in Bihar when she acted in Tamasha and received praise for her role. She effectively managed her studies and worked simultaneously.

Worked In A
Popular Short Video

Not only in a movie like Tamasha, but she has also worked on social media content. Arushi has previously worked in a short video with Little Things actor Dhruv Sehgal, the footage is 60seconds long and is titled Catorce- Diminishing Returns. It is a conversation between two people.

Who Cast Her
In Love Aaj Kal?

Arushi became a part of Imtiaz’s much ambitious project through Mukesh Chhabra’s casting agency. The agency took to Twitter earlier to announce her mainstream debut with Love Aaj Kal.

The actress was not active on social media from the past few years, but she has been very active on Instagram recently. If you go through her feed, it is evident that she loves traveling, especially in the mountains. She also seems a fan of late singer Amy Winehouse, loves a variety of dishes, and also enjoys The Simpsons.

Arushi plays the role of Kartik’s school mate ‘Leena’ in the ’90s and seems open-minded girl considering that era. However, she is afraid to meet him in public in fear of family. At one point in the trailer, we also see her walking away from Kartik on a railway station.  She has created a good impact on the audience through the trailer, and we can’t wait to see her on the big screen.

When asked about Aarushi,  “I have known Arushi for years,” Imtiaz Ali said, without elaborating. “I feel it will be better if I speak about her once she herself comes in front of you. I am glad you noticed her. I hope she will be liked by you and the audience.”

What do you think about Arushi’s performance in the trailer?
Do let us know in the comments.