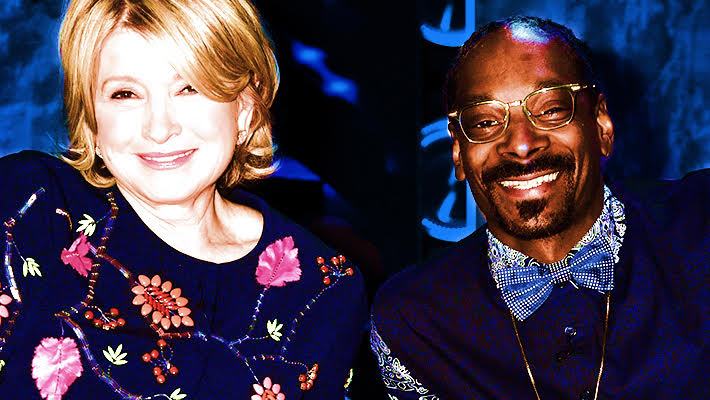 When it comes to lifestyle-experting, Martha Stewart is an institution. Decades before Maria Kondo sparked joy, the no-nonsense Stewart pioneered the field and built-up an empire, long after co-launching a catering business in the 1970s, which led to countless book, TV, and other scattered business ventures. However, Martha’s career drew plenty of fresh new eyeballs in 2008 during her first crossover project with rapper Snoop Dogg. The resulting effort, a delightful mashed potatoes segment, quickly captivated the masses due to what appeared to be an unlikely but quickly developing friendship. They threw warring cognac and white pepper in those potatoes, and it was madness! Not to mention effective in a long-term business sense.

The pair have continued to hone that chemistry in a variety of other projects (I’m sure you can guess who helped her get into the weed game), including three seasons of Martha and Snoop’s Potluck Dinner Party, and now they’re doing the Super Bowl thing. More specifically here, Martha and Snoop filmed a joint commercial to help launch Tostitos Strips and Avocado Salsa as the desired snack for the NFL playoffs. The big game spot ties directly into how Snoop and Martha are both incredible apart, but they’re even better together. Martha was gracious enough to speak with us about her friendship with Snoop, along with assorted Super Bowl and avocado-related matters.

Avocados should be in everything, I think, so this salsa sounds intriguing.

I love avocados, and this salsa is actually really tasty. I ate at least a jar of it while doing the commercial with Snoop.

In general, what makes you a fan of the avocado?

I find avocados to be extremely delicious. I like pretty much anything made with avocados, and I’ll just eat an avocado for breakfast with a soft-boiled egg. And I love guacamole, and I eat it with flour tortillas, but I’ve never made a salsa with it, so this is a very good introduction to avocado salsa. It’s unexpected, and it’s really good with the Tostitos chips.

You’re teaming up with Snoop Dogg again for this commercial, a decade after your mashed potato team effort. Does it feel like a decade?

Oh, it’s probably at least a decade. And we’ve done mashed potatoes, we’ve done brownies, and we’ve done other things. We’ve had a very nice time doing our show, which is in the third season, and we’ve combined our talents for different kinds of products, and this is our first Tostitos commercial. We had fun doing it and spent a whole day together in LA a couple of weeks ago, and then we got to do the elevator shoot for InStyle magazine, which was a lot of fun. He was the most popular appearance at that Golden Globes party. Everybody was waiting for Snoop.

Do you two keep in touch between projects or save it for the camera?

Oh yeah, definitely. We have some investments together, and I’m working in the CBD area now to create a skincare line, and he introduced me to the largest CBD producer up in Canada, the Canopy Group, which I became an advisor to, and he’s been an early advisor to them also, so we do business dealings together, and he’s pretty avant garde. He’s quite amazing. He has his fingers in a lot of pies, let’s put it that way.

One of the best things you two have done was the Ghost reenactment for your Potluck Dinner Party show.

How did that come together?

Well, VH1 has a very creative promotions team, and they came up with that idea and the Titanic one, it’s online also. It would make my mother cringe that I’m flirting with a man half my age. I thought, “He’s only 46 years old, and he’s younger than my daughter,” and we laugh about it because he could be my son. They put us in these sort-of compromising positions like that, with pottery, god! But it worked!

If you and Snoop hosted a Super Bowl party together, who would you invite?

Oh my gosh. Of course, we would have to have all the retired football players. He’s a big football fan. He knows a lot more about football than I do. I’ve been a long time Giants fan, and the Giants are acting like dead people, and so, this year, we have new teams. He’s a Steelers fan, and yes, I’m a Giants fan, neither of which are going to the Super Bowl, so I don’t know who he’s rooting for — I haven’t talked to him about that yet. But he’s gonna be down there, and I’m certainly going to be there. I go every year.

So no actual Super Bowl party hosting for you?

I go to the game, and I go to the parties. I may be doing some work, but I don’t know exactly what I’m doing yet.

What items should one never serve at a Super Bowl party?

Oh well, don’t serve fancy dessert. You have to keep people’s energy going, so I think savory foods are better for the Super Bowl than sweet, and I think you probably have to have a really good drink, maybe a signature drink/cocktail that will keep people coming back for more. There’s of course the, you know, I’m trying to think of the … where you open the trunk?

A tailgate! My boss will be amazed that I know that word.

Yes, the tailgate party, which I go to every year at the Super Bowl. This year, it’s in Miami, so I’ll be at a tailgate. And then there’s barbecue, all sorts of things you could do, but basically, savory is a big hit. And to be more man food than girl food because it’s the men who are just really eating and watching. The women are walking around and looking at everything.

You don’t ever shy away from humor, Martha. Would you ever consider doing some straight-up comedy?

Well, I don’t think I’d be a very good stand-up comic, but I do like to participate in these roasts for Comedy Central. Charles Barkley is having a roast, and they just asked me if I’d roast him, and I roasted him just personally on Celebrity Jeopardy! once, but unfortunately, I’m busy that day, and I can’t do it.

Well, my terrible, worst-ever running joke that I get roasted for is that I’d do anything for an avocado.

You would do anything for an avocado? Why?

Okay, it’s a slight exaggeration and probably sounds saucier than it should. And since they go for $1 or $2 bucks, I should probably up my currency, right?

Well, they cost like $1.99 for cheap ones and $3.99 for organic ones. I just bought one on Sunday, so they’re cheap, but they are actually nutritious and nice food, and I don’t think it’s bad that you like them so much. Elaborate on that with the people who roast it.

I will. And speaking of being cost-effective, how do these Tostitos snacks rank?

It’s really good. And it’s not only good, but it’s also an affordable snack, and these Tostitos are tasty and crispy and strong enough to hold the topping or dipping, those are like $4.29, I think. And the avocado is like $3.99, I think, for 15 ounces. So it’s a creamy, tasty, spicy dip, that I think everybody’s gonna like, made with real avocados.

How does this salsa compare to guacamole, though?

It’s different. It’s thicker, creamier. It has jalapeno and onion in it, and that’s the distinguishing flavors, and with the saltiness of the chip, they just go together really well.

Yes, and thank you!

You can watch Martha and Snoop’s Super Bowl commercial below.