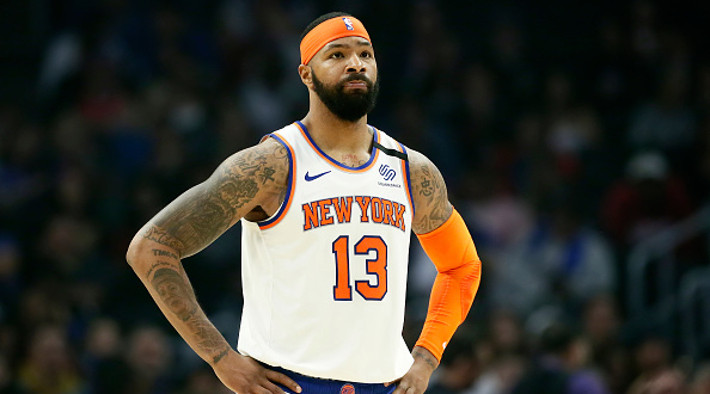 The Knicks-Grizzlies game at Madison Square Garden on Wednesday should’ve been a relatively innocuous affair, and it generally was, right up until an up-and-coming Memphis team put the screws to the flailing Knicks in the waning moments of the fourth quarter and nearly started an all-out brawl.

With under a minute to go, Jae Crowder stole an inbounds pass, and subsequently finding himself unguarded in the corner, made the only choice he could make and opted to hoist up a three. Elfrid Payton took that as an affront and proceeded to give him a dangerous shove into the courtside seats, and the result was both of their ejections after the ensuing scuffle that also included Marcus Morris getting tossed.

But it didn’t stop there. When speaking to reporters after the game, Morris was still livid about the play in question, accusing Crowder of attempting to embarrass the Knicks when the game was already in hand, and in the process, making misogynistic remarks about Crowder’s style of play.

“He’s got a lot of female tendencies on the court, flopping and throwing his head back…he’s soft, very woman-like”

It even prompted ESPN’s Tim Legler to join the fray and essentially take the Knicks side in what transpired on the court (and, to be clear, not Morris’ comments after), which got a response from Crowder in return.

AYE TIM WITH ALL DUE RESPECT I ONLY PLAY ONE WAY AND THATS HARD TIL THE BUZZER SOUNDS. IM SORRY IF IT DISGUSTS YOU. I KNOW KNICKS ARE YOUR TEAM BUT U SHOULD TELL THEM TO PLAY HARDER AND LESS TALKING.! ????????‍♂️ https://t.co/fIRXKBGJmK

The backlash to Morris’ sexist remarks was, rightfully, swift across social media, such that Morris quickly took to the platform himself to apologize for his choice of language.

I apologize for using the term “female tendencies” I have the upmost respect for women and everything they mean to us. It was a Heat of the moment response and I never intended for any Women to feel as though in anyway I’m disrespecting them. Again I apologize with my comments.

Still, this clearly won’t be the end of it. The league will no doubt take a look at the melee that involved a lot of pushing and shoving between several players and will likely have some thoughts about Morris’ words afterwards as well. That’s not to mention Payton’s initial shove on Crowder that could result in a suspension and/or fine.