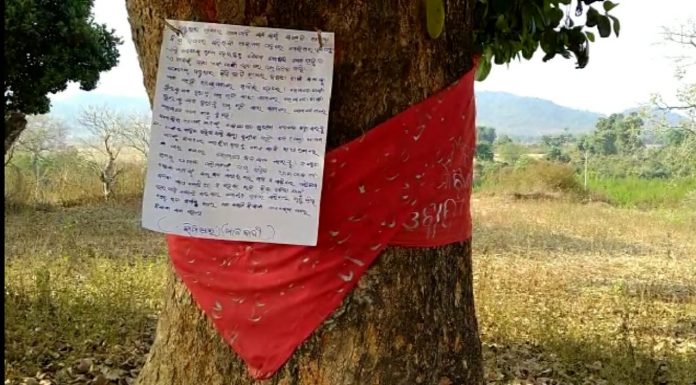 Malkangiri: Several Maoist posters criticising the police and the government were seen put up at various places on the ten-kilometre-long stretch from Jodamba to Panasaput in Swabhiman area under Chitrakonda block of Malkangiri district Sunday.

Maoists have pronounced death sentence for four villagers of Jodamba panchayat for their alleged cooperation with the security establishment among other things in the posters.

Local residents first spotted the posters and informed the police about it this morning. The cops later removed these posters.

With tension running high in the area following the faceoff between Maoists and villagers at Janturai village and the villagers stoning a Maoist to death January 25 night, the Red Rebels have been targeting the four villagers of Jodamba panchayat. Given the circumstances, these posters have stoked fear among the local residents.

Meanwhile, police DG Abhay and other top police officers have been reviewing the security setup in the area to avoid any untoward incident.