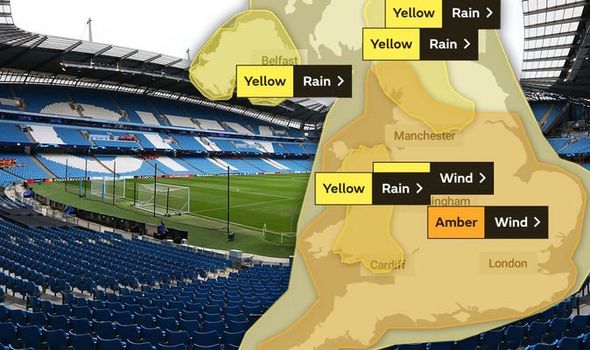 Manchester City have announced their Premier League fixture against West Ham has been postponed.

The 4.30pm kick-off at the Etihad Stadium is the latest sporting fixture on Sunday to fall victim to Storm Ciara. It was due to be televised live on Sky Sports.

A statement from the club read: “Due to extreme and escalating weather conditions and in the interests of supporter and staff safety, today’s match has been postponed.

“This decision has been made by Manchester City’s Safety Officer following consultation with Club stakeholders and officials at West Ham United.

“Further information regarding the rescheduling of today’s match will be published in due course.”

West Ham fans faced travel chaos as a result of the 90mph winds lashing the United Kingdom, with a number of trains from London Euston to Manchester Piccadilly cancelled.

The Women’s Super League clash between the Hammers and City has also been called off.

A statement from the east London outfit read: “West Ham United and Manchester City agree that the safety of supporters and staff is of paramount importance and, with the amber weather warning in place and winds around Rush Green Stadium particularly strong, that could not be 100 per cent guaranteed for today’s match.”

We’ll be bringing you the very latest updates, pictures and video on this breaking news story.

For the latest news and breaking news visit: express.co.uk/sport/football

Stay up to date with all the big headlines, pictures, analysis, opinion and video on the stories that matter to you.